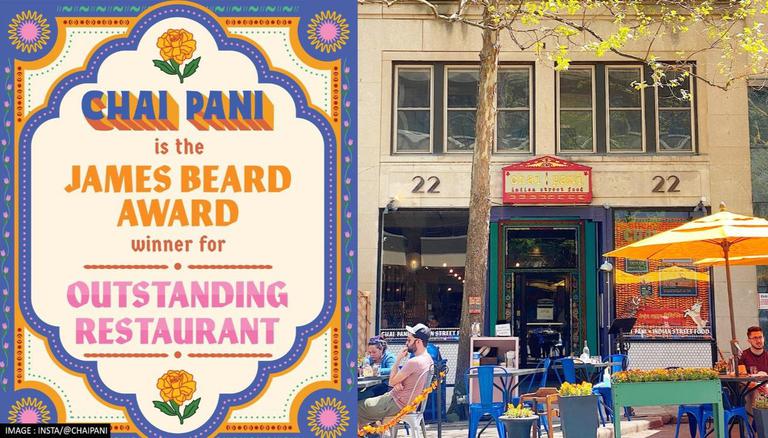 
'Chai Pani' has been crowned as the best restaurant in America for serving economical and tasty 'Indian street snacks' in North Carolina. The “James Beard Award for Outstanding Restaurant” this year went to Chai Pani, an Asheville restaurant that serves vibrant, crunchy Indian street foods. The Indian eatery was voted America's Most Outstanding Restaurant at the James Beard Foundation Awards on Monday in Chicago, beating other finalists such as Brennan's in New Orleans, as per the James Beard Foundation.

The 'Outstanding Restaurant' category honours a restaurant that showcases persistent "excellence in food, atmosphere, hospitality, and operations" while positively contributing to its greater community.

Chai Pani: Best restaurant in the US

.@meherwanirani of @chaipani, 2022 #jbfa winner of Outstanding Restaurant, talks about the transformative power of restaurants. pic.twitter.com/f7Hi95ZtCx

Chai Pani, which also has a location in Decatur, Georgia, is famous for its spicey tangy chaats and other street foods.

James Beard Award recipients were chosen by subcommittee members and tasting experts and panelists based on their "exceptional talents and achievements" in the culinary business. It was also taken into account their demonstrated dedication to racial and gender justice, community, sustainability, and a culture where everyone may flourish, Citizen Times reported.

After being suspended in the years 2020 and 2021, so the foundation could address systematic prejudice and as lockdowns to halt the transmission of the COVID-19 disease prompted the temporary closure of numerous US eateries, the awards were given for the first time in two years.

Chai Pani has been described by Conde Nast Traveler in their review as "a blast of colour, street art, and music" that simulates a thrilling journey down one of Mumbai's packed streets. "Its specialty is chaat—street food—and so its vibe is lively and fun," it added.

The James Beard Restaurant and Chef Awards event took place at the Lyric Opera in Chicago on Monday night. The 2022 awards will be the first to be given out under revised standards and processes, as well as a new code of ethics, following claims of poor behaviour and a lack of diversity among chefs, CNN reported.

"To celebrate, support, and elevate the people behind America's food culture", the non-profit 'James Beard Foundation' was founded over 30 years ago, shortly after "pioneer foodie" James Beard's demise.