Israeli Foreign Minister Yair Lapid, on Wednesday, touted the need for an alternative to the Joint Comprehensive Plan of Action (JCPOA) deal. 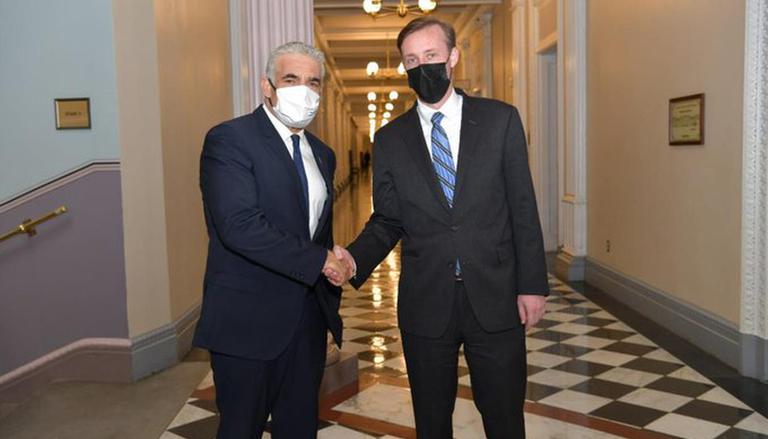 
Israeli Foreign Minister Yair Lapid, on Wednesday, touted the need for an alternative to the Joint Comprehensive Plan of Action (JCPOA) deal, which has been on a hiatus since July. Speaking during a meet with US National Security Advisor (NSA) Jake Sullivan, he said that Iran was increasingly becoming a “nuclear threshold state.” Earlier in the day, Lapid had addressed a press conference along with US State Secretary Antony Blinken wherein he had warned of alternate plans to the nuclear deal if diplomatic pathways fail.

“The foreign minister shared with the national security advisor Israel’s concern about Iran’s race towards nuclear capability and the fact that Iran is becoming a nuclear threshold state,” Lapid’s office said in a statement.

It was great to welcome Israeli FM @yairlapid to the White House today. Excellent discussion of the critical regional and global issues of importance to our two countries. pic.twitter.com/v0KwrTi0bu

In the aftermath of meeting Sullivan, Lapid also sat down with Congressional leaders headed by House Speaker Nancy Pelosi while also discussing with US Vice President Kamala Harris. As per a White House statement, they both reaffirmed their will to bolster the US-Israel relationship, counter Iranian aggression and rebuild the annihilated Gaza Strip.

The negotiations on the Joint Comprehensive Plan of Action (JCPOA) or Iran nuclear deal has been on hiatus since June but more recently both sides have hinted at its possible revival. Earlier on Wednesday, Blinken stressed that all parties involved in the deal have agreed that Iran cannot be allowed to acquire a nuclear arsenal. Asserting that time was “running short”, he added that they were “getting closer to a point at which returning to compliance with the JCPOA will not in and of itself recapture the benefits of the JCPOA”. Under the deal, Tehran is obliged to scale back its nuclear or uranium enrichment program in exchange for promises of economic relief by the US and other parties.

The deal, signed in 2015 between Iran and other major world powers, including the United States, France, Britain, China, Russia, and Germany (P5+1), saw Washington lifting economic sanctions against Tehran. In return, the Islamic Republic agreed to bring down its uranium enrichment programme. However, Donald Trump withdrew the US from the pact in 2018, calling the structure of the deal "rotten". The Islamic Republic then retaliated by ending its compliance with the deal. As of now, six talks have been held in an attempt to revive the controversial nuclear pact, but despite US President Joe Biden vowing to resume the pact at the earliest, negotiations continue to be in limbo.