“How dare anyone — anyone — diminish, belittle, or deny the hell they were put through?” asked Biden. “We saw it with our own eyes," he stressed 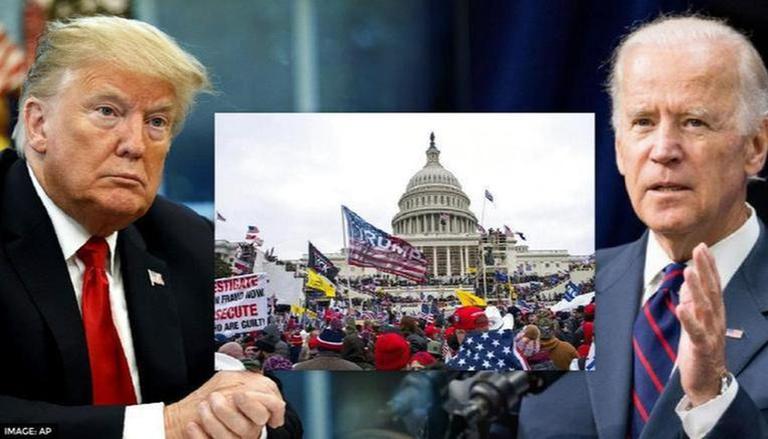 
As the White House marked the one year anniversary of the Capitol riot on Jan. 6 unleashed by the far-right MAGA supporters that stormed the government building in Washington DC to ‘Stop the Steal’, US President Joe Biden stated in his speech on Thursday that “democracy was attacked” in America and that the “will of the people was under assault.”

“Our democracy was held. We the people endured. And we the people prevailed,” said the US Democrat leader, condemning the former US President Donald Trump, who, he said, had not just lost an election, but “tried to prevent the peaceful transfer of power as a violent mob breached the Capitol.” “They failed,” he asserted, as he categorically noted that such an attack must “never, never happen again.”

I did not seek this fight brought to this Capitol one year ago today, but I will not shrink from it either.

I will stand in this breach and defend this nation. I will not allow anyone to place a dagger at the throat of democracy. The will of the people will be heard. pic.twitter.com/spR4EkrVb7

For the first time in the history of the United States, said Biden, the violent mob outnumbered the Capitol Police, the DC Metropolitan Police Department, the National Guard, and other brave law enforcement officials who “saved the rule of law.” The law enforcement fought in the face of a brutal attack, said Biden, according to a White House release on Jan.6.

As the US marked the day of remembrance, the US President spoke from the Statuary Hall in the United States Capitol, where the House of Representatives met for 50 years in the decades leading up to the Civil War.

“This is — on this floor— is where a young congressman of Illinois, Abraham Lincoln, sat at desk 191,” Biden said. For more than 200 years, a sculpture depicting Clio above the door leading into the Rotunda has witnessed the records of the events taking place in this chamber that mostly resonate with “real facts” and “history,” Biden stressed. The truth of the Jan. 6 was witnessed by him, Vice President Kamala Harris, and American citizens “with their own eyes,” Biden stated.

“We shall know the truth, and the truth shall make us free.  We shall know the truth,” the US leader asserted, stating that on January 6th, 2021 Trump supporters, whom he labelled as the rioters rampaged and waved Confederate flag for the first time inside the  Capitol. That flag, said Biden, symbolized the cause to destroy America.

Folks, we have a responsibility to see that America is an idea. One that requires vigilant stewardship.

As we stand here today, one year since January 6, 2021, we must be firm and resolute and unyielding in our defense of the right to vote and to have that vote counted.

Biden compared the events of Jan. 6 to the Civil War, as he derided the citizens who broke windows, kicked in the Capitol doors, and breached the security, law & order of the nation. “American flags on poles being used as weapons, like spears.  Fire extinguishers being thrown at the heads of police officers,” Biden stressed, adding that those citizens that claim to be patriots and supporters of America’s law enforcement, assaulted Capitol police officers, “dragged them, sprayed them, stomped on them.” At least 140 police officers were injured in the attack, Biden said, noting the statistics of the casualties. A military officer described the attack on the Capitol as a “medieval” battle, and that “he was more afraid that day than he was fighting the war in Iraq,” said Biden.

“How dare anyone — anyone — diminish, belittle, or deny the hell they were put through?” asked Biden. “We saw it with our own eyes.  Rioters menaced these halls, threatening the life of the Speaker of the House, literally erecting gallows to hang the Vice President of the United States of America.”

The US President launched a scathing attack on the ex-Republican leader Donald Trump, stating that the former president had rallied the mob to attack the Capitol while he sat and watched the events unfold from the private dining room off the Oval Office in the White House. “He [Trump] watched it all on television and doing nothing for hours as police were assaulted, lives at risk, and the nation’s capital under siege,” Biden said. It was “an armed insurrection,” Biden reminded, adding that lives were lost and the mob was trying to suppress will of the people, the democratic process.

“They weren’t looking to uphold a free and fair election. They were looking to overturn one,” he said. “They weren’t looking to save the cause of America. They were looking to subvert the Constitution,” he added. Further launching an attack on the former President, Biden said that Trump, despite being the leader of the United States of America, created and spread a web of lies about the 2020 election. “He’s done so because he values power over principle because he sees his own interests as more important than his country’s interests,” Biden asserted.

Trump “can’t accept he lost, even though that’s what 93 United States senators, his own Attorney General, his own Vice President, governors and state officials in every battleground state have all said: He lost,” said the US President.

Biden stressed that under his administration, America would not be a country that accepts political violence as a norm. “Are we going to be a nation where we allow partisan election officials to overturn the legally expressed will of the people?” he asked. The US leader added that he cannot allow his country “to be that kind of nation” that thrived on "big lie" told by former president Trump and his many Republican followers, who he said were “trying to rewrite history.” “The election of 2020 was the greatest demonstration of democracy in the history of this country,” asserted Biden in his speech as he labelled the Jan. 6 riots “undemocratic,  and frankly, un-American.”