Haley also called for the resignation of Kamala Harris, Lloyd Austin and General Milley. Several other GOP leaders joined her in criticising the US President 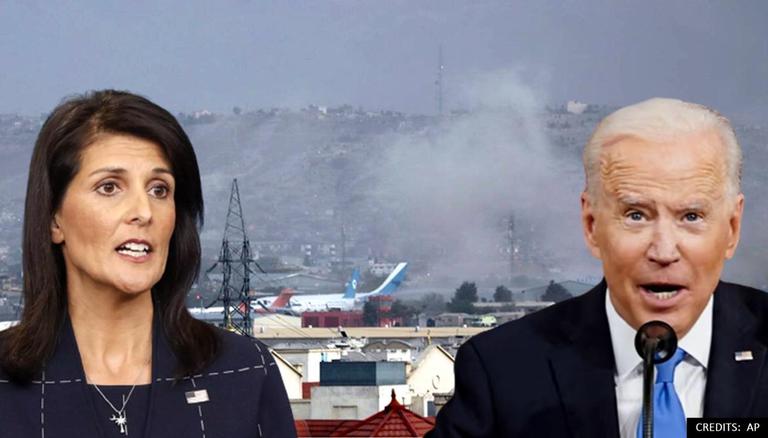 Should Biden step down or be removed for his handling of Afghanistan? Yes. But that would leave us with Kamala Harris which would be ten times worse. God help us. #ItDidntHaveToBeThisWay #GodBlessOurTroops #AfghanistanDisaster

Here's what some other Republicans had to say following the Kabul explosion.

Former Trump White House advisor Kellyanne Conway sarcastically said, "#Impeach? Why? It's not like they called the President of Ukraine or anything."

If President Trump can be impeached over a phone call, then the time has come to IMPEACH Biden for gross negligence in Afghanistan. Americans deserve better. We deserve better than someone who willfully IGNORES the WORST crisis in decades.

Congress members offered plenty more criticism. "If President Trump can be impeached over a phone call, then the time has come to IMPEACH Biden for gross negligence in Afghanistan," said Rep. Ronny Jackson, R-Texas.

Biden's resignation or impeachment after attack at Kabul airport

"Americans deserve better. We deserve better than someone who willfully IGNORES the WORST crisis in decades (sic)," Jackson wrote on Twitter, adding, "There will be time for investigations and assigning blame later, but we do need a new Commander-in-Chief NOW! The leadership that got us into this does not have the competence and will to get us out. People are now officially dying!!"

Rep. Byron Donalds (R-Fla.) and Claudia Tenney (R-NY) also issued strong remarks demanding responsibility. Rep. Elise Stefanik (R-NY) said, "Joe Biden has blood on his hands. The buck stops with the President of the United States. This horrific national security and humanitarian disaster is solely the result of Joe Biden’s weak and incompetent leadership. He is unfit to be Commander-in-Chief."

READ | Biden in moment of silence for Kabul victims

Earlier this week, I too called on the President of the United States to resign immediately following his haphazard withdrawal from Afghanistan. He has abdicated his responsibility and duties entrusted to him as POTUS, and he must RESIGN IMMEDIATELY.#BidenResign #BidenResign https://t.co/mPHThWqL3Y

Travis Wines of Michigan, Amanda Makki of Florida, and Lavern Spicer of Florida are all Congressional candidates who have called for the US President's resignation or impeachment. Makki also proposed invoking the 25th Amendment, which establishes processes for the president's replacement.

Meanwhile, President Biden met with his national security staff to be briefed on the latest developments throughout the day.

(with inputs from AP, Image: AP/RepublicWorld)