Osama Bin Laden Wanted Biden To Be President So He 'would Lead US Into Crisis': Report

Osama bin Laden's letter forewarning of an American 'crisis' under Biden's Presidency comes as fury mounts against the US President for 'abandoning' Afghans. 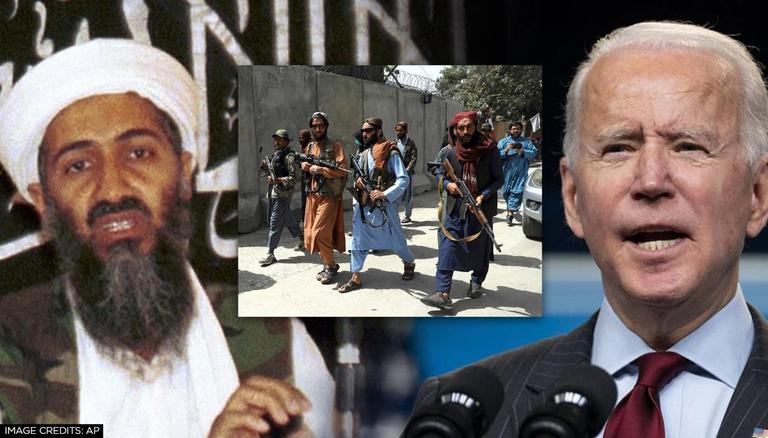 
Slain Al Qaeda leader Osama bin Laden had backed Joe Biden for the post of the US President in 2010 saying that he would 'lead the US into a crisis', a seized letter has revealed. The 48-page missive recovered from a series of documents from the 9/11 mastermind has reportedly shown that Osama bin Laden had banned Al Qaeda from assassinating Joe Biden since he believed that he would be an 'incompetent President'.

The document has been penned by Laden to an aide identified as 'Brother Shaykh Mahmud' in 2010 when former President Barack Obama was at the helm of affairs. According to DailyMail, Osama had outlined a plan for then-President Barack Obama's assassination and had sought the need to build two hit squads- in Pakistan and Afghanistan to plot attacks against Obama and ex-CIA director David Petraeus.

On page 36 he says, "Obama is the head of infidelity and killing him automatically will make Biden take over the presidency for the remainder of the term, as it is the norm over there. Biden is totally unprepared for that post, which will lead the US into a crisis."

The letter was recovered from a trove of documents at the Pakistan compound where he was killed by US special forces in 2011. It was first made public in 2012 but gains significance amid the widespread criticism surround Joe Biden's 'chaotic' Afghanistan pullout.

It is pertinent to note that in June 2020, Donald Trump Jr. had highlighted a scrap of the document on his YouTube program "Triggered". In the months leading up to the US Elections, Donald Trump Jr. had stated that Osama bin Laden wanted Obama assassinated since it would put an 'incompetent' Biden in-charge of affairs. "He wanted to assassinate President Obama because it would put Joe Biden in charge, and essentially he's so grossly incompetent, it would lead to the destruction of America," Trump Jr. said June 18, 2020.

READ | Trump tells Biden he should have evacuated US people & equipment, then bombed Afghan bases

Biden under criticism for Afghanistan crisis

Laden's letter forewarning of an American 'crisis' under Biden's Presidency comes as fury mounts against the US President for 'abandoning' Afghans. Joe Biden has not only been blamed for his 'failed' evacuation plan in Afghanistan, but for passing several 'insensitive' comments against the state of Afghan citizens amid the Taliban takeover.

READ | Joe Biden questioned on criticism of US withdrawal from Afghanistan; asks 'from where?'

In his first interview after the Taliban overran Kabul, the US President defended the country's pullout from Afghanistan saying that the overall process of withdrawal 'could not have been done without any chaos'. He then drew severe backlash for not knowing when the video of Afghans falling off a US military plane leaving Kabul emerged.

Later it was revealed that a dozen diplomats sent a confidential memo to Secretary of State Anthony Blinken on July 13 warning that the Taliban was rapidly gaining ground. The document revealed that the US knew as far back as in July that the capital city of Kabul was vulnerable to collapse, the Wall Street Journal reported.

However, Biden has responded to the chaos saying that 'the crisis was inevitable'. “There was no way in which you could have gotten out without seeing what you are seeing today," he has claimed.