Syria: Multiple Explosions Heard Inside US Military Base In Homs Province

Multiple explosions were heard inside the US military camp in the At-Tanf area, close to the Iraqi border in Homs Province on Saturday 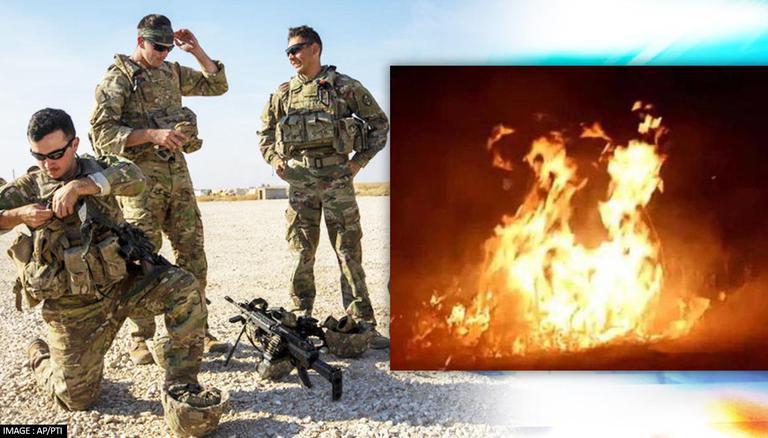 
On Sunday, multiple explosions were heard inside the US military camp in Syria's At-Tanf area, close to the Iraqi border in Homs Province, Sputnik reported citing Syrian state TV. However, the US military is yet to make any statement regarding the incident. Since 2016, American forces have occupied the desert base, which is located along the M2 Baghdad-Damascus highway. It was used to train US-backed rebel forces fighting President Bashar al-Assad's administration at the time. Last month, The New York Times reported that the base was also attacked by "suicide drones" in October. The report claimed that Tehran was behind the strike.

It is pertinent to mention here that a multiple rocket attack took place on the largest American airbase in eastern Syria on November 23, reported Tehran Times. The attack on the US base in Syria came just days after the American media reported that pro-Iranian forces carried out a drone attack on an American base, also in Syria, as a response to Israeli airstrikes on the Arab Republic. Meanwhile, the White House reportedly believed that the attack on Al Tanf military base in Syria was "deliberate and coordinated" and that the US reserved the right to respond.

Meanwhile, on November 28, the United States dispatched a large convoy of trucks carrying forces, arms and logistic supplies to Syria’s northeastern province of Al-Hasakah from Iraqi territory, reported Sputnik citing SANA news agency. The report stated that the convoy consisted of around 100 trucks moving in two columns. The first convoy had roughly 60 trucks, while the second had around 40. They entered Syria through the al-Waleed crossing, which is located in Iraq. Both convoys were reportedly protected by a number of armoured vehicles.

WE RECOMMEND
US not afraid of Chinese competition and its advancement in hypersonic weapons: Austin
US, West condemn Taliban over ‘summary killings’ of ex-soldiers and police
US & Japan decide to hold 2+2 bilateral meet after positive talks between Defence chiefs
US intel unveils Russia's Ukraine invasion plan; estimates involvement of 175,000 troops
Iran abandons compromises in latest Vienna nuclear talks; US still 'hopeful' about deal