Trump Claims Impeachment Would Cause 'civil War-like Fracture' In US

Donald Trump has warned the Democratic-led impeachment proceedings against him and equated the move to oust him from office as 'treason.'

Donald Trump has warned the Democratic-led impeachment proceedings against him and equated the move to oust him from office as 'treason.' The US President further stated that his expulsion would spark a "civil war-like fracture" in the country.

An infuriated Donald Trump tweeted a conservative pastor’s comment that removing him would provoke a “civil war-like fracture” in America. Previously, Trump has been lashing out at the Democratic-driven impeachment inquiry for abuse of power, calling it a "witch-hunt." 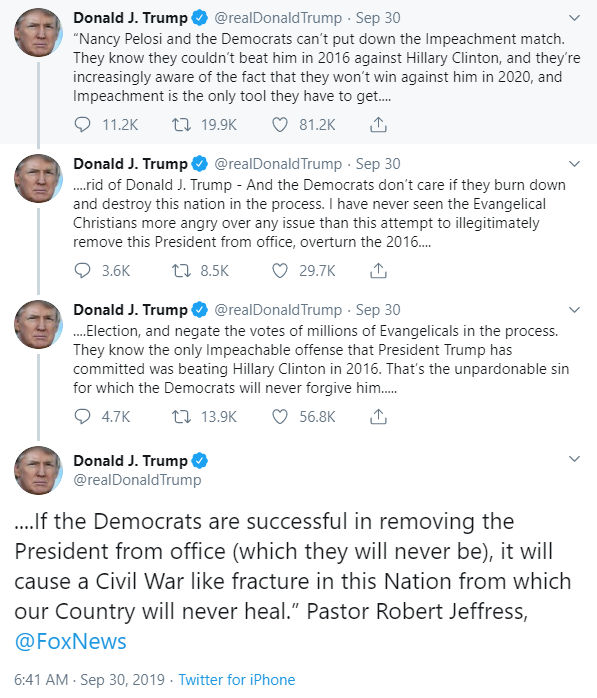 Democrats have been calling to impeach the US President on multiple occasions since he took office over 2 years back. However, US House Speaker Nancy Pelosi launched an inquiry against Trump last week after the release of his call transcripts with the Ukrainian President.

Donald Trump on Wednesday dismissed as a "joke" the grounds laid out for the impeachment inquiry into him, as Democrats stood firm in accusing the US president of a "mafia-style shakedown" of his Ukrainian counterpart. Trump denied claims that he abused his office by repeatedly urging President Volodymyr Zelensky to probe his rival Joe Biden -- as confirmed in a call transcript released by the White House.

The next explosive episode in the rapidly unfolding impeachment drama is set for Thursday when acting director of national intelligence Joseph McGuire testifies on Capitol Hill. "They are getting hit hard on this witch hunt because when they look at the information, it's a joke," said the president, who struck an uncharacteristically subdued tone at his first news conference since Democrats launched an official impeachment inquiry.

"Impeachment for that? When you have a wonderful meeting, or you have a wonderful phone conversation?" A more defiant Trump had earlier insisted he exerted "no pressure" on Kiev -- a claim echoed by Zelensky, who appeared side-by-side with the US leader at a long-planned meeting on the sidelines of the UN General Assembly. But the publication of the transcript sent new shockwaves through Washington, including within the ranks of Trump's Republican Party, with Senator Mitt Romney calling it "deeply troubling". Two competing narratives immediately took hold. Trump and his allies claimed the July 25 call contained no evidence of a quid pro quo pressuring Zelensky to probe the president's top Democratic rival for the White House.