Trump Hits Out At Ashraf Ghani, Says ‘He Is A Total Crook, Never Had Confidence In Him'

"I never had a lot of confidence, frankly, in Ghani. I said that openly and plainly I thought he was a total crook," former US President Donald Trump said 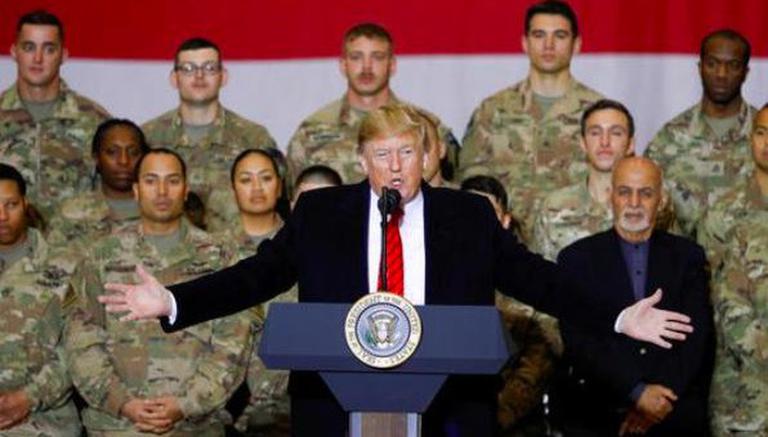 
Former US President Donald Trump on Thursday launched a scathing attack on the exiled ex-Afghan President Ashraf Ghani, saying that the latter was a “total crook” and that he “never had full confidence” in his regime. As the Taliban made rapid advancements to seize control of the capital metropolis of Kabul, 72-year-old Ghani fled the country. He first attempted to enter the neighbouring Tajikistan or Uzbekistan where his chopper was denied entry, according to initial ground reports, but later was reported to have taken refuge in UAE, the UAE Ministry of Foreign Affairs and International Cooperation sponsoring ousted Afghan leader confirmed, labelling the move as a ‘humanitarian act’.

“The UAE Ministry of Foreign Affairs and International Cooperation can confirm that the UAE has welcomed President Ashraf Ghani and his family into the country on humanitarian grounds,” the Foreign Ministry said in a statement which was later posted to its website.

Trump on Thursday derided the now settled in UAE Afghan ruler in an interview to Fox accusing him of “getting away with murder.” Russian news agencies claimed that  Ghani escaped Afghanistan with a chopper full of cash, four cars, and stole $169 million from state coffers as Afghans feared for their lives from the Taliban’s reprisal. Ghani later denied those allegations in a broadcast message streamed out of his Emirati location, saying that he had fled with“one set of traditional clothes, a vest and the sandals” leaving behind his priceless books in haste. He clarified, that he had abruptly left Kabul to prevent bloodshed and had taken no money as he departed the presidential palace.

“If I had stayed, I would be witnessing bloodshed in Kabul,” Ghani said in a video streamed on Facebook on Wednesday, his first public comments. “Kabul should not be turned into another Yemen or Syria over power struggles so I was forced to leave,” he added.

In the live-streamed interview, former US President Donald Trump meanwhile lambasted Ashraf Ghani, adding that he negotiated with Mullah Abdul Ghani Baradar Akhund, the Taliban's co-founder, in February in Doha for drawing down US troops. But that agreement, Trump said, was “condition-based.” The deal entailed that if the Taliban spewed violence or ruckus against the Americans or its allies the US would retaliate with airstrikes on the Taliban leader's residence village, and other parts of Afghanistan where the Taliban enjoyed stronghold.

"I wanted [the Taliban] to get a deal done with the Afghan government," Trump said in his televised remark, adding "Now, I never had a lot of confidence, frankly, in Ghani. I said that openly and plainly I thought he was a total crook.”

Furthermore, the former American leader said Ghani "spent all his time wining and dining our senators." “The senators were in his pocket. That was one of the problems that we had. But I never liked him... He got away with murder in many, many different ways,” Trump said, without elaborating on the murders ex-Afghan President "got away with.”

Denouncing Ghani’s governance, Trump said that he believed in the Russian media reports and himself suspects that former Afghanistan ruler fled with a stash of cash. Trump cited Ghani’s “lifestyle”  "his houses" and "where he lives," as the reason for believing so. The Russian embassy in Kabul has made strong claims that Ghani and his entourage escaped Kabul with "four cars full of money," the Russian news agency RIA reported.

Owner of Afghanistan's top television stations Saad Mohseni in his statement to the New York Times called Ashraf Ghani a “traitor.” "[Ghani] will be known as the Benedict Arnold of Afghanistan," Mohseni told the NY newspaper. "People will be spitting on his grave for another 100 years,” he went on to add.

Meanwhile Ghani in his broadcast statement dismissed allegations of “fleeing” stating “Do not believe whoever tells you that your president sold you out and fled for his own advantage and to save his own life.”