Trump Spotted Flying In Run-of-the-mill Jet, Netizens Say 'how The Mighty Have Fallen'

Donald Trump's aircraft fleet has been in the media limelight which included his S-76 helicopters, and two Sikorsky S-76Bs when he was the sitting US president.

Former US President Donald Trump was roasted on Sunday for being spotted flying in a downgraded run-of-the-mill jet, wherein he was forced to bend his neck if he stood upright, with chances of hitting his head against the ceiling. Trump was caught by the reporters of DailyMail NYC boarding Cessna Citation X (N725DT) business jet, on which he has hosted his pals Stephen Baldwin, Dennis Rodman and Gary Busey earlier.

The 45th President of US, whose aircraft fleet has been in the media limelight which included his S-76 helicopters, and two Sikorsky S-76Bs when he was a president, was mocked for downgrading his standards. From the posh 757 with a billboard motif that he purchased from Microsoft founder Paul Allen, which touted a 57-inch high-definition TV screen, gold seatbelts, a cinema, bathroom with gold sinks, an anti-missile defense system, a treadmill, and an advanced encrypted communication system, Trump had to make massive adjustment with a plane that had a glitch in accommodating a tall body posture. 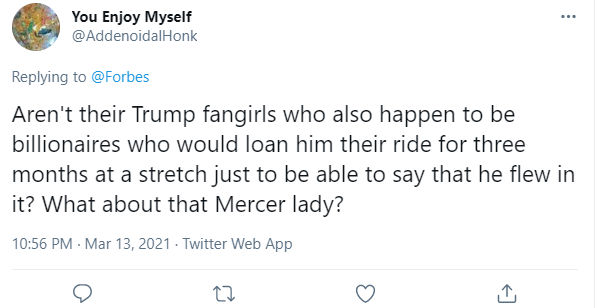 Still holding a decent reputation as the fastest business jet from 1996, Citation X, a utility air carrier, that Trump boarded stood nowhere close in comparison to Boeing 747s and 757s designated as Air force One in which he earlier flew with pride. FAA had also threatened to ground Trump's Citation X plane over registry expiration earlier.

While the $100 million worth Air Force One flaunts 4,000 square feet of interior space, surgeon onboard, an expansive medical suite and an operating room with high-tech communications equipment, Trump’s nine-seat jet touts capability of flying at 705 mph. A private jet expert, Doug Gollan told Forbes, that inside the ex-President’s 1997 jetliner model, made obvious via tail one could even feel their hairbrush against the plane’s ceiling, and its engine, unlike Rolls-Royce RB211 turbofan engines in classified 43 seater Air Force One, were outdated. Earlier, speaking at a presser, Trump called his model of Citation X as "just a regular private jet". A Dailymail report citing a reaction said that Trump flying on a regular plane like an average CEO is an example of how "mighty have fallen".