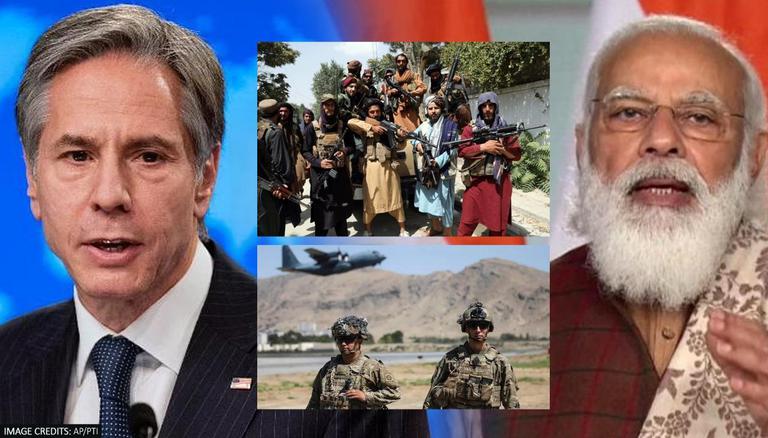 
US Secretary of State Antony Blinken has been in touch with India to plan the United States’ “way forward” for over-the-horizon capabilities and strategies for counterterrorism military operations in Afghanistan after the United States-led forces deployed by the North Atlantic Treaty Organisation allies and operational partners pulled out of the Central Asian region with Taliban’s takeover of Kabul. Blinken on 1 September told US Congress that in the aftermath of the military withdrawal and evacuation efforts that concluded 31 August, America is now in close coordination with ally India to discuss the implementation of the US President Joe Biden’s “over the horizon” strategy (OTH) to identify and strike terrorists with aerial surveillance and drones from abroad.

In revision to his Afghanistan policy, US commander-in-chief Joe Biden had told the presser at the White House that after the military pull out, as the threat from terrorism continues in its pernicious nature, and risks spilling into other countries, US’ counterterrorism strategy “has to change”. He then stressed, “We will maintain the fight against terrorism in Afghanistan and other countries, we just don’t need to fight a ground war to do it.” He further stated that his administration will opt for what’s called “over-the-horizon capabilities”, which means the US military  forces can strike terrorists and targets “without American boots on the ground”. He asserted: “ISIS-K: We are not done with you yet.”

Speaking about the United States’ so-called over-the-horizon functions, Blinken told reporters that the White House promised Americans to combat the threat of cross-border terrorism that emanates out of Afghan soil. He then stressed that the Biden administration “is deeply involved with India” on that front for over-the-horizon operations. When asked by US agencies if the administration has reached out to India “as a staging area” that could exceed the capabilities of future horizon military forces, Blinken responded that US “is in contact with India” without elaborating on the critical details.

Separately, US President Biden, as well a spokesman for his administration said that America will rely on “over-the-horizon” (OTH) military capabilities to snub growing threats of terrorism in the Central Asian region. The United States will “act swiftly and decisively as needed,” they stressed, according to the White House. Tennessee Congressman Mark Greene, meanwhile, enquired whether India would serve as staging partner for US Armed forces across the horizon operations.

“Qatar, Doha is a bit too far away elsewhere, so I’m talking about northwestern India as a potential, Kuwait, everything. What about North India, and did you get in touch, you? Did you think about it? ” asked US Congressman Greene. To this Blinken responded: “To install without divulging key details. “At least I’m glad to know that I have the opportunity to speak. I think it’s very fair,” Greene was quoted saying.

India’s Prime Minister Narendra Modi is expected to travel to the US later this month to meet US President Joe Biden, and participate in the first in-person Quad Summit-level meeting on 24 September, sources in New Delhi revealed. The meeting will also host Australian Prime Minister Scott Morrison and Japanese premier Yoshihide Suga, the White House announced earlier today. The four leaders would discuss deepening their ties and advancing practical cooperation on areas like combatting COVID-19, addressing the climate crisis, and promoting a free and open Indo-Pacific, the White House Press Secretary Jen Psaki told a briefing on 14 September.

WE RECOMMEND
Quad Leaders Summit hosted by Biden to be held in Washington on Sept 24
Joe Biden visits California, Idaho to assess damages caused by wildfires
United States prepared for dialogue with North Korea despite missile tests
Analysis: Biden's war on virus becomes war on unvaccinated
'You leave Americans behind!' Biden heckled by angry public over Afghanistan pullout in NJ