US Returns 27 Stolen Antiquities To Cambodia Including Angkorian Buddhist Statue

The United States on June 10 announced the return of at least 27 antiquities values around $3.8 million to the people of Cambodia in a repatriation ceremony. 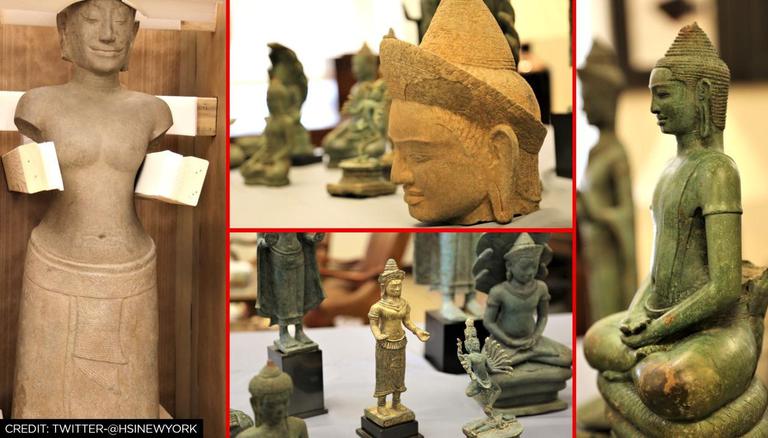 
The United States on June 10 announced the return of at least 27 antiquities values around $3.8 million to the people of Cambodia including Angkorian Buddhist statue. The artefacts were returned by Manhattan District Attorney Cy Vance in a repatriation ceremony attended by the Cambodian Minister of Culture and Fine Arts, Dr. Phoeurng Sackona, Cambodian Ambassador to the US, Chum Sounry and US Homeland Security Investigations Special Agent in Charge Erik Rosenblatt. In a statement, Vance said that the repatriation of the 27 “stunning relics” is an important link between the nation’s classical Angkor era.

“The repatriation of these 27 stunning relics to the people of Cambodia restores an important link between the nation’s classical Angkor era and its modern customs and beliefs that, for far too long, was disrupted by the greed of stolen antiquities traffickers,” said District Attorney.

“Today’s event is a powerful reminder that individuals who plunder and sell culturally significant items are committing crimes not only against a country’s heritage but also its present and future. I want to thank my Office’s Antiquities Trafficking Unit and our partners at Homeland Security Investigations for their relentless efforts that have resulted in nearly 400 treasures being returned to 10 countries over the past year. I look forward to further repatriations in the near future,” he added.

#HSINewYork is proud to have worked this investigation w/ the @ManhattanDA that resulted in the return of 27 antiquities, each invaluable to the preservation of Cambodian history, back to their home country. @cambodiaembus #HSIhttps://t.co/ALTIpPnkcz pic.twitter.com/dknKLLgtCe

Thanks to @ManhattanDA and @HSINewYork for securing 27 priceless antiquities to return to the people of #Cambodia, a tribute to the cooperation between our countries on preventing the looting and trafficking of Khmer artifacts.https://t.co/3PuAxGL672

US Homeland Security pledged to tackle plundering of heritage

Fitzhugh also expressed the commitment of US Homeland Security Investigations to tackle the plundering of cultural heritage and the “illicit trafficking of cultural property.” The HSI New York Special Agent in Charge said in a statement, “Today, more than two dozen antiquities are being returned to the people of Cambodia; and while the underground market value of these items is in the millions, these pieces are invaluable to the preservation of Cambodian history. HSI New York is proud to have worked this investigation with DANY that led to the ultimate return of these items to their home country, as each artefact is a testimony to the rich cultural heritage of Cambodia.” Meanwhile, Sackona noted the “win-win policy” of the Royal Government that has prevailed peace in Cambodia acts as a strong foundation for the preservation of nation’s culture.