New airline Akasa Air on Monday said it is on track to receive its first Boeing 737 Max plane by mid-June and launch commercial operations by July. 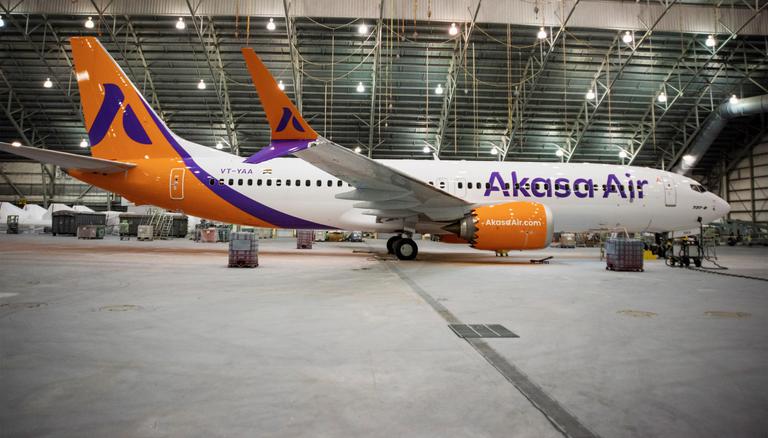 
New airline Akasa Air on Monday said it is on track to receive its first Boeing 737 Max plane by mid-June and launch commercial operations by July.

The airline on Monday released the photographs of its first Max plane from the Boeing production facility in the USA's Portland as it gets ready for delivery.

"The airline recently reaffirmed its commitment of being on track to receive its first aircraft in India by mid-June and launch commercial operations in India by July 2022," its statement mentioned.

It plans to fly 18 aircraft by the end of March 2023 across domestic routes in the country, focusing on metro to tier-2 and tier-3 cities, it noted.

The airline, which is backed by ace investor Rakesh Jhunjhunwala and aviation veterans Vinay Dube and Aditya Ghosh, received the no-objection certificate from the Ministry of Civil Aviation in August 2021 to launch commercial flight operations.

With the Directorate General of Civil Aviation giving the green light to Boeing 737 Max aircraft in late August last year, Akasa Air signed a deal with Boeing on November 26, 2021, to purchase 72 Max planes.

Akasa Air on Monday said the Max aircraft will be powered by the highly fuel-efficient CFM LEAP B engine.

"Providing the lowest seat-mile costs for a single-aisle airplane as well as high dispatch reliability and an enhanced passenger experience, the 737 Max is one of the strategic factors that will give Akasa Air a competitive edge in its dynamic home market," it mentioned.

India's growing economy and expanding population will fuel strong demand for commercial flights, driving the need for an estimated 1,000 new airplanes in India over the next 20 years, the airline said.