In Assam, the battle is set between the NDA alliance, the UPA alliance, the AlUDF and the BDF for the 14 Lok Sabha seats up for grabs, which polled in the first three phases of the Lok Sabha elections on April 11,18,23.

In Assam, the battle is set between the NDA alliance, the UPA alliance, the AlUDF and the BDF for the 14 Lok Sabha seats up for grabs, which polled in the first three phases of the Lok Sabha elections on April 11,18,23. 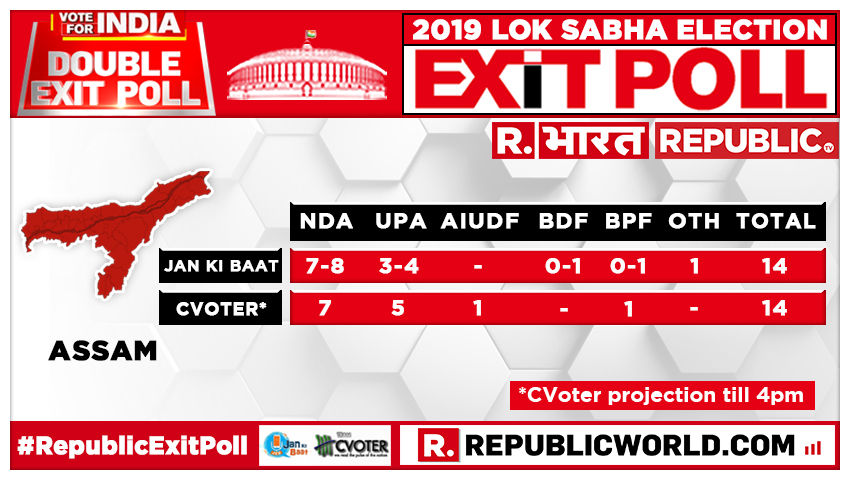 #RepublicExitPoll | Projections for Assam are in - Jan Ki Baat predicts 7-8 seats for BJP and 4-3 seats to Congress.

Tune in to watch it LIVE here - https://t.co/LGCyJUWcLF

The last two Assembly elections (126 seats) are seen to follow an increasing trend for the NDA as it increased its win from 11 to 60 seats during 2016. While the voter turnout had increased considerably in 2016 from 75.9% to 83.9%, the UPA diminished its foothold as its seat share fell from 78 seats to 26 seats in 2016 as the saffron party focused more on local leadership and turned the anti-incumbency in its favour naming Sarbananda Sonowal as its chief ministerial candidate.

In 2019, Assam has witnessed an average voter turnout of 77% in its three poll phases. 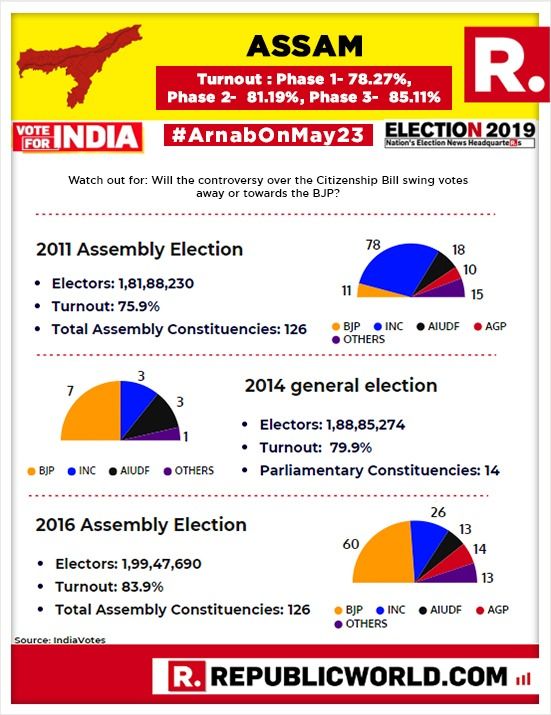 Gauhati: This semi-urban constituency which consists of the state capital Guwahati has a major Muslim population as well as a considerable SC/ST population. Here the battle is between BJP's Queen Oja and Congress' Bobbeeta Sharma. The anti-NRC agitation is a major concern for the BJP here due to its sizable minority population.

February saw major agitation in Assam opposing the BJP's amendment to the Citizenship Bill (2016) which granted Indian citizenship by naturalisation to communities such as Hindus, Buddhists, Christians, Jains, Parsis and Sikhs, fleeing persecution in Afghanistan, Bangladesh and Pakistan. Citizenship would be granted to those who have lived in India for six or more years. While the bill was passed in the Lok Sabha triggering huge protests throughout the north-east region, the bill expired in the Rajya Sabha where the BJP does not hold the required numbers.