Polling in Chhattisgarh which sends 11 Lok Sabha members to the Parliament was held in the first three phases of the polls on April 11, 18 and 23. While Chhattisgarh had been BJP's bastion for approximately 15 years, Congress party swept the state in the 2018 Assembly elections. This elections in Chhattisgarh revolved around the issues related to the escalating tension due to Maoists and farmers welfare policies under the newly-formed Congress government-led by CM Bhupesh Baghel.

In the 2019 polls, while the Congress is looking forward to retaining the momentum from the assembly polls, the BJP is aiming to topple the Congress vote-share by highlighting the welfare policies initiated by Prime Minister Narendra Modi-led Central government. In 2014 Lok Sabha elections, the BJP won massive victory with 10 out of 11 seats in Chhattisgarh, while Congress was left to one seat which is Durg.

Here are the projections of Odisha:

As per Jan Ki Baat projections, there is a neck-to-neck contest between BJP and Congress with the Rahul Gandhi-led Grand Old Party taking the lead as per the estimated projections.

As per CVoter projections (till 4 pm), cut-throat competition is predicted between the NDA and the UPA with 6 and 5 seats respectively. As per the vote-share predictions, UPA is predicted to win 38.3% votes, while NDA is projected to gain an overwhelming 50.8% vote-share in the 2019 polls. 'Others' are predicted to manage 10.9% vote-share. 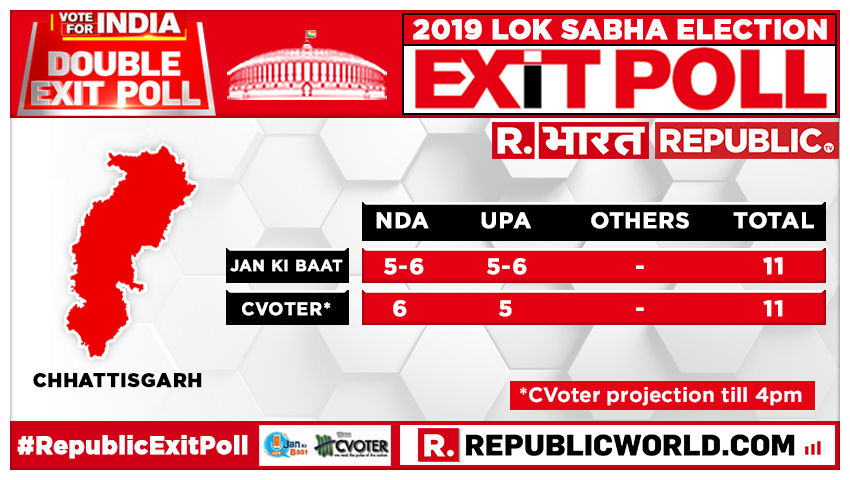 Key candidates from Chhattisgarh in the fray for the 2019 Parliamentary elections:

Here's how Chhattisgarh  voted in the last three elections in the state: 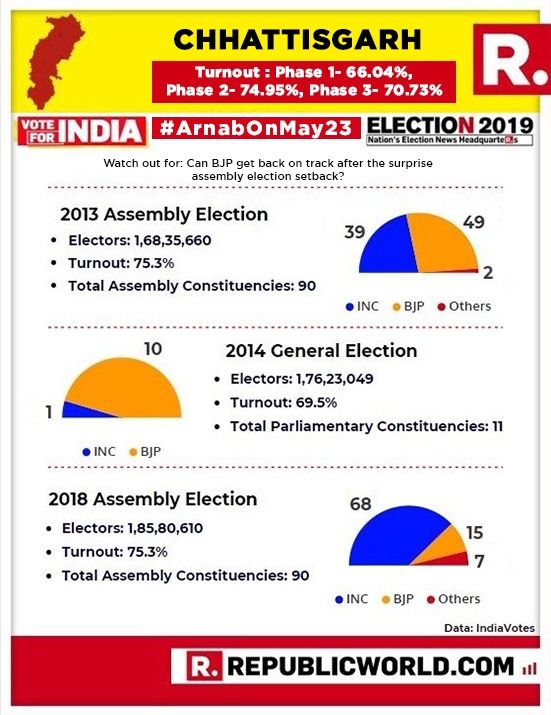