On Monday, Political Affairs Committee of AAP approved all the 70 candidates for the upcoming Delhi assembly election which includes some controversial names.

On Monday, the Political Affairs Committee of the AAP approved all the 70 candidates for the upcoming Delhi assembly election. 46 sitting MLAs have been nominated by the party. On the other hand, 15 new candidates have been given tickets. Delhi Chief Minister Arvind Kejriwal and Deputy CM Manish Sisodia will contest from New Delhi and Patparganj respectively.  Writing on the microblogging website Twitter, Sisodia stated that 8 women candidates had also been given the party ticket.

Meanwhile, the list also comprises some controversial names such as Amanatullah Khan and Satyendar Jain. Khan has been accused of allegedly delivering a provocative speech during the protests against the Citizenship Amendment Act and was booked by the Ghaziabad police for inciting violence through his social media posts. On the other hand, Jain has been chargesheeted by the Central Bureau of Investigation in a disproportionate assets case.

In a significant development, Atishi who is considered to have played an integral role in the Delhi government’s school education reforms will contest the Assembly elections. In the 2019 Lok Sabha polls, she lost to BJP’s Gautam Gambhir from the East Delhi constituency. On similar lines, Raghav Chadha- the national spokesperson of AAP who also lost in the Lok Sabha elections has been given an opportunity to contest from the Rajinder Nagar constituency. He is a member of the AAP’s executive council. 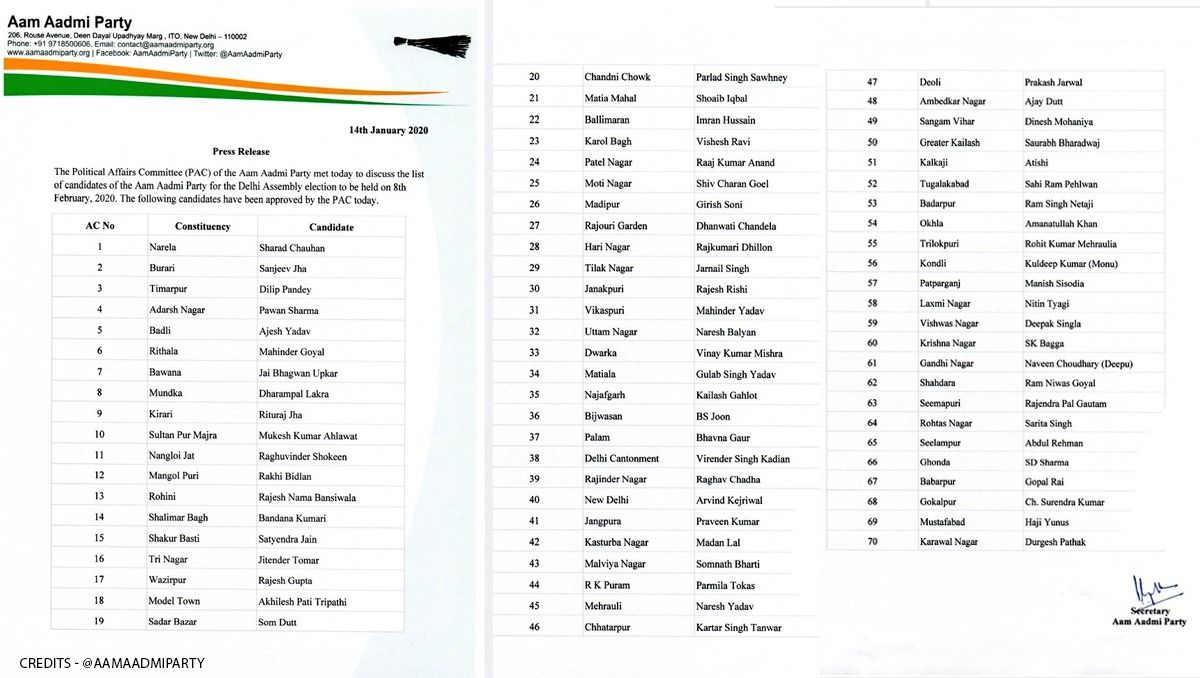 The Election Commission of India announced that Delhi would go to the polls on February 8. The results will be declared on February 11. In the previous election, AAP had won a resounding majority bagging 67 out of 70 seats as against BJP who could win only from three constituencies. So far, BJP has not named its Chief Ministerial candidate.