Congress To Make Supreme Court A Constitutional Court, Introduce A Court Of Appeal Between SC And High Courts: Manifesto

Congress president Rahul Gandhi on Tuesday released the election Manifesto for the party ahead of the ensuing 2019 Lok Sabha polls.

Congress president Rahul Gandhi on Tuesday released the election Manifesto for the party ahead of the ensuing 2019 Lok Sabha polls. While the manifesto's main focus was on the newly-introduced 'NYAY' scheme, jobs, education, infrastructure, and women empowerment, the Congress party also plans to make a certain number of amendments to the judicial system of the country.

In order to maintain the independence and integrity of the judiciary, the Congress party in the manifesto proposed to limit the mandate of the apex court, by introducing a Bill to amend the Constitution to make the Supreme Court a Constitutional Court that will hear and decide cases involving the interpretation of the Constitution and other cases of legal significance or national importance.

Further, proposing to add a new layer between high courts and the top court, Rahul Gandhi's party called for a Bill to establish a 'Courts of Appeal' to hear appeals from judgments and orders of the High Court which will sit in multiple Benches of 3 judges each in 6 locations.

Moreover, Congress promised to establish a National Judicial Commission (NJC) which will be responsible for the selection of judges for appointment to the High Courts and Supreme Court.

To 'prevent post-retirement assignments', the Congress also fixed the retirement age of High Courts and the Supreme Court judges, as well as of judicial members in Commissions and Tribunals, to 65 years.

"Congress will establish, by law, an independent Judicial Complaints Commission to investigate complaints of misconduct against judges and recommend suitable action to Parliament," the manifesto further read.

In order to 'enhance representation of women, SC, ST, OBC, minorities' in the judicial system, Congress further claimed to provide reservation to the under-represented sections of society. 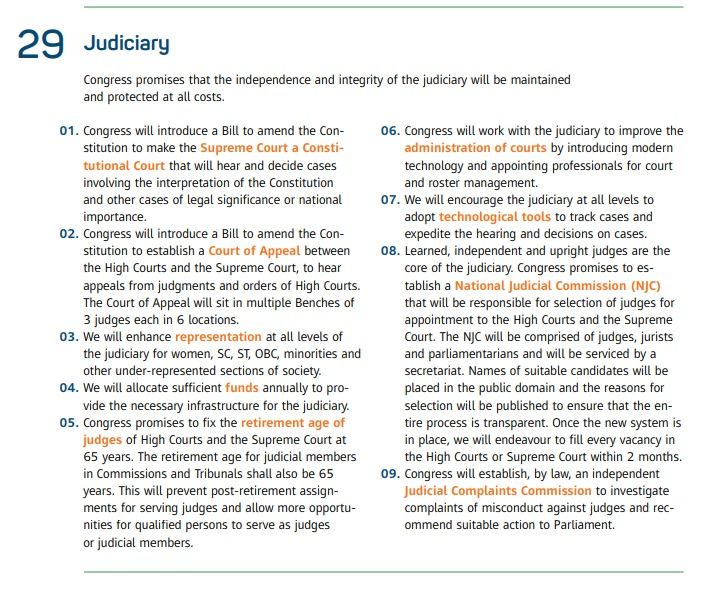 In its manifesto, the grand old party also promised to abolish the Section 124A of the Indian Penal Code, which amounts to sedition.