The Congress party in its 2019 Lok Sabha election manifesto has made a number of significant and controversial announcements, especially to do with national security and internal security-related issues.

The Congress party in its 2019 Lok Sabha election manifesto has made a number of significant and controversial announcements, especially to do with national security and internal security-related issues.

Among declarations such as that it will review the Armed Forces Special Powers Act (AFSPA), review the deployment of troops in J&K, omit the 'sedition' law and others, is also an intimation that it would make the post of National Security Advisor (NSA) statutory, with the NSA accountable to Parliament and not the Prime Minister's Office (PMO) as it currently is.

Here are the main points and claims in the Congress manifesto's National Security section:

And here is the full section: 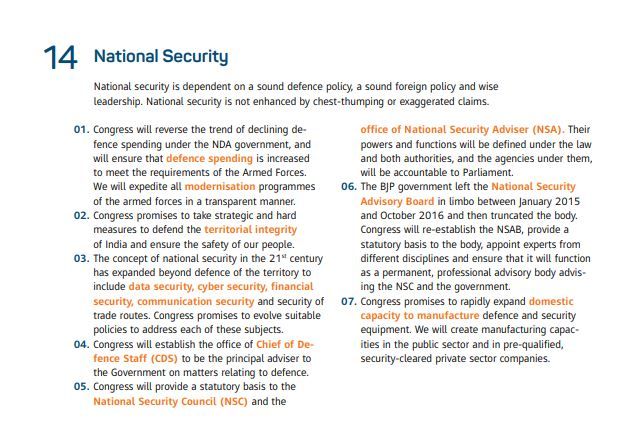 PEOPLE HAVE PLEDGED SO FAR
Congress bats for dialogue, promises review of troop deployment & AFSPA, and assures no change in Article 370 in J&K section of its 2019 election Manifesto. Read here
Congress promises to abolish 'Sedition' law in its Lok Sabha 2019 manifesto
'Why should he resign?', says Sanjay Nirupam after Rahul Gandhi-led Congress bagged 52 seats in the Lok Sabha election 2019
WATCH: "People made fun of me when I said we will cross 300 seats," says PM Modi, adding that the word 'Wave' seemed less while describing the 2019 election victory at BJP headquarters, Ahmedabad
After US President Donald Trump, daughter Ivanka Trump extends congratulatory greetings to PM Narendra Modi on his 2019 General Elections win
The fall of Amethi - why Rahul Gandhi lost?
READ: Congress debacle in 2014 vs Congress disaster in 2019, seat by seat comparison of party's performance in Lok Sabha elections
DO NOT MISS
MNS THREATENS WARIS PATHAN
MEA: ABRAHAMS SENT BACK 'IZZAT SE'
ACTIVIST HECKLED OUT OF RALLY
BJP TAKES AIM AT SHIV SENA
WHOSE BOWLING ACTION BEST?
ZUCKERBERG GETS ARMPITS BLOW-DRIED