2019 Lok Sabha Election Results For Tamil Nadu: Resurgent DMK-Congress Brush Aside AIADMK, Win 31 Seats Out Of 38 After Years Of Tumult

After seven phases spread across 39 days Lok Sabha elections in India has finally come to an end with the verdict of who will form the next government out in some hours. While the nation is waiting to see its selected representative in the 17th Lok Sabha, both the national parties - BJP and Congress - were trying their luck after they sealed an alliance with AIADMK and DMK respectively.

After seven phases spread across 39 days, Lok Sabha elections in India have finally come to an end with the verdict of who will form the next government out in some hours. While the nation is waiting to see its selected representative in the 17th Lok Sabha, both the national parties - BJP and Congress - were trying their luck after they sealed an alliance with AIADMK and DMK respectively.

Tamil Nadu that sends 39 MP’s to the Parliament witnessed its first Lok Sabha polls in the absence of sitting CM and AIADMK chief Jayalalithaa as well as her predecessor and DMK chief Karunanidhi. The presence of  TTV Dinakaran’s Amma Makkal Munnetra Kazhagam (AMMK) in the fray, the contest here was a tough one.

While AIADMK won only one seat in the state, its ally BJP was unable to open its account. In an outstanding victory, MK Stalin- led DMK won 23 out of states 38 seats (election in Vellore was countermanded). DMK's ally Congress won 8 seats while the left party - CPI and CPI(M) won two seats each. Indian Union Muslim League and Viduthalai Chiruthaigal Katchi also won one seat each in the state. (As per EC at 11:30AM) 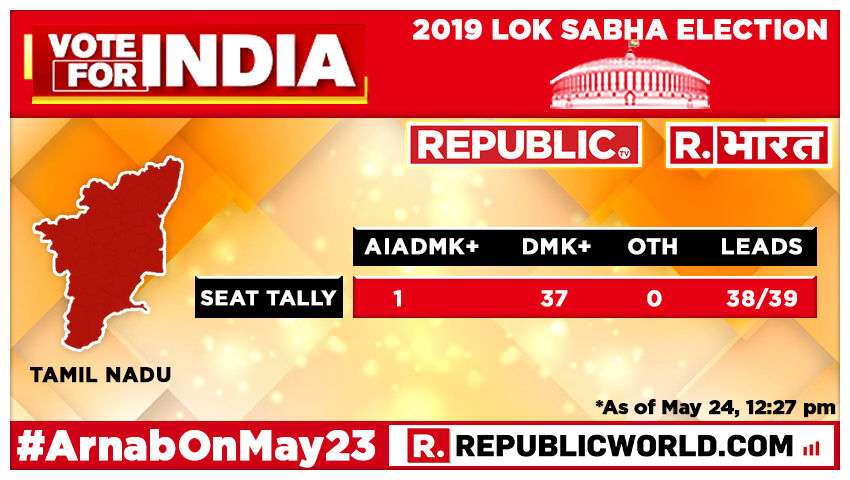 As per projection by Jan Ki Baat, the UPA comprising Congress and DMK is projected to emerge on top in the state with the DMK leading the charge.

Voting in the state was held on April 18 and witnessed an estimated 71% voter turnout in 38 constituencies. The Election Commission countermanded the elections for Tamil Nadu's Vellore Lok Sabha constituency following the massive seizures of unaccounted cash made by Income Tax (IT) department from the cement warehouse of a DMK functionary. PM Modi in a rally in Theni, slammed P Chidambaram and his son Karti Chidambaram in a veiled reference to their alleged involvement in the INX Media-Aircel Maxis cases saying:

"What all have we witnessed? Father becomes the Finance Minister and his son loots the country. Whenever they (Congress) are in power they always loot," he said. In a major election controversy, Makkal Needhi Maiam Chief Kamal Haasan shared a letter claiming that the term 'Hindu' was not a part of Indian culture and was labelled by foreign invaders and was endorsed by Mughal and Britishers. He had further claimed that there is no reference to the word 'Hindu' in Shavaite and Vaishnaivite writings by ancient saints. He also said that ‘Free India's first terrorist was a Hindu, his name is Nathuram Godse’.

Meanwhile, while the campaigning was underway for Lok Sabha elections,  Rajinikanth announced that he will contest the assembly polls in the state and plan the launch of his party after the results of Lok sabha elections. He also clarified that he is not supporting any party despite Kamal Haasan urging him to support his party.

In 2014, AIADMK under the leadership of Jayalalithaa won 37 out of 39 seats. NDA ally PMK won 1 seat and BJP won 1 seat. In a shock to the Karunanidhi led DMK which ruled the state a year ahead after winning 18 seats won no seats.