In a major development from Uttar Pradesh Lok Sabha polls, Congress has fielded Sachin Chaudhary from Amroha seat against BSP's Danish Ali in the state.

As the countdown to 2019 General Elections began in India, political parties are putting their best candidates forward to contest for crucial Lok Sabha seats. In a major development from Uttar Pradesh Lok Sabha polls, Congress has fielded Sachin Chaudhary from Amroha seat against BSP's Danish Ali in the state.

Earlier on Saturday night, Congress had announced senior leader Rashid Alvi's candiature from Amroha in its eighth list, who however later withdrew it. 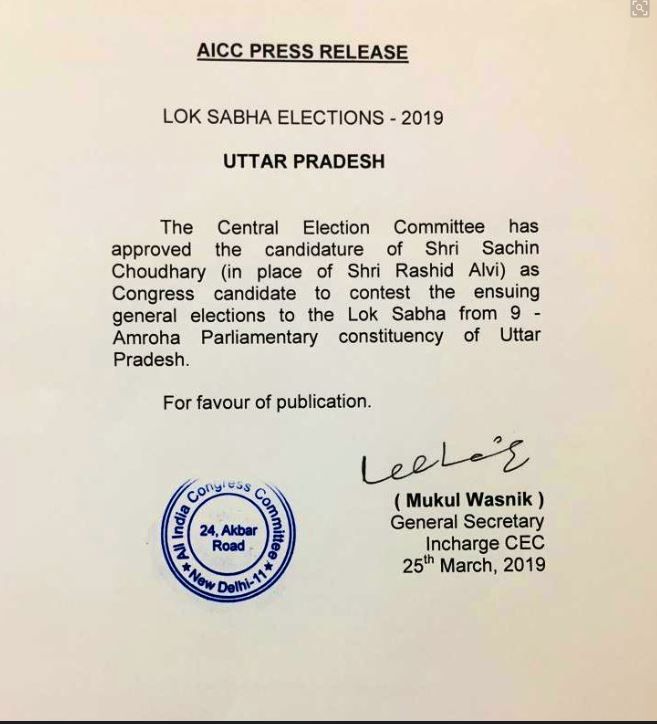 Congress Central Election Committee announces the candidate for the ensuing elections to the Lok Sabha constituency of Amroha. pic.twitter.com/et9dLRDOoE

The Congress decision to field Sachin Chaudhary instead of Rashid Alvi came days after the BSP announced Danish Ali’s name as its candidate from Amroha. On March 22, former JD(S) leader Danish Ali jumped the ship to the BSP after which he was granted a Lok Sabha election ticket by the Mayawati-led party to contest from Uttar Pradesh's Amroha constituency.

Rashid Alvi previously served as the Parliamentary Party leader of the Bahujan Samaj Party from 1999 to 2004. However, he was expelled from the party in 2004 after which he joined Congress party and was twice elected to the Rajya Sabha from Andhra Pradesh.

In a big breaking development, BSP chief Mayawati on March 20 announced that she wont be contesting the 2019 polls. The Lok Sabha polls in Uttar Pradesh will be held in seven phases with the counting of votes to take place on May 23.

Meanwhile, Congress president Rahul Gandhi is all set to contest from UP's Amethi against senior BJP leader and Union Minister Smriti Irani. The bastion of Congress for decades, Amethi constituency has been contested by the Gandhi family since 1980- with Sanjay Gandhi first, then former PM Rajiv Gandhi, followed by UPA chairperson Sonia Gandhi and now the Prime Minister aspirant, Rahul Gandhi. Prime Minister Narendra Modi will once be contesting from Varanasi Lok Sabha seat.