"I Don't Trust Exit Poll Gossip...": Trinamool Chief Mamata Banerjee Has This To Say Amid Exit Polls Projecting BJP Inroads Into Her Backyard

West Bengal remained the newsmaker of the 2019 Lok Sabha polls, with violence including crude bombs, lathi charges and repeated political clashes and claims of attacks from candidates became the talking point in the state as polling was held in all seven phases spread across two months in the politically important state.

As the final chapter in the polls now awaits the results to know the composition of the 17th Lok Sabha which and consequently, the next government of India, the Republic Media Network on May 19 brought to its viewers a mega double exit poll which presents a projection on what the final outcome may be, ahead of the result day on May 23.

Reacting to the Exit Polls, West Bengal CM and Trinamool chief Mamata Banerjee took to Twitter and wrote that she does not trust "exit poll gossip".

She further appealed to the Opposition parties to be 'united, strong and bold, alleging that the "game plan is to manipulate or replace thousands of EVMs" through the 'exit poll gossip'.

She urged the Opposition parties to fight the "battle together".

I don’t trust Exit Poll gossip. The game plan is to manipulate or replace thousands of EVMs through this gossip. I appeal to all Opposition parties to be united, strong and bold. We will fight this battle together

Here are the projections for West Bengal:

As per the predicted figure by C-voter, Mamata Banerjee will continue to hold the Trinamool-ruled state by crushing Congress out of the race by winning 29 seats. However, BJP is projected to win 11 seats in the state to give Trinamool a hard time.

According to Jan Ki Baat, however, the BJP is projected to be in line for an even more significant result by winning between 18-26 seats while the Trinamool is projected to win between 13-21 seats - one of the headlines of the election if it does come to pass. 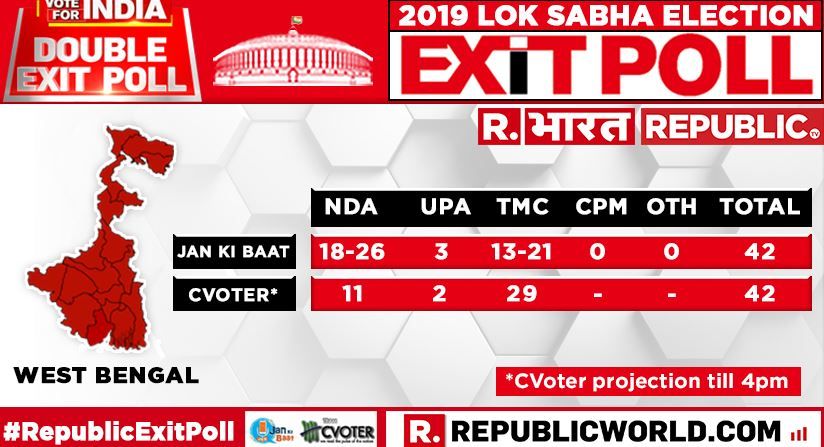 #RepublicExitPoll | Projections for West Bengal are in, CVoter projects 29 seats for TMC and Jan Ki Baat projects 13-21 for TMC. Tune in to watch it LIVE here - https://t.co/LGCyJUEBn5 pic.twitter.com/aNEMBD46UJ