'83' Twitter Reviews: Netizens Recall Having 'goosebumps' While Watching The 'masterpiece' 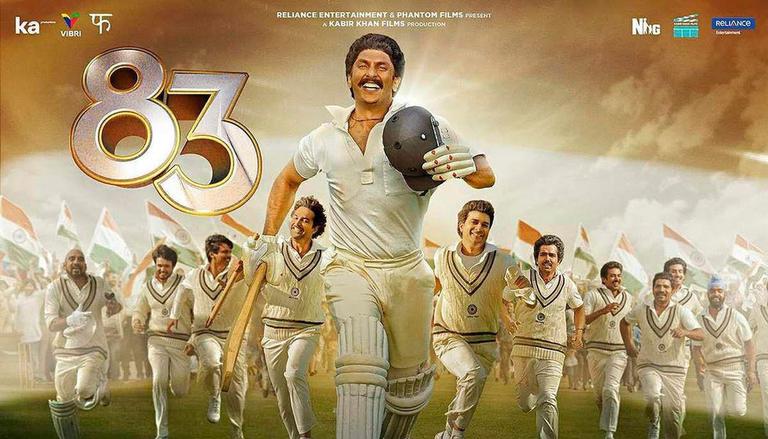 
A film that has kept the audience waiting for one-and-a-half years, 83 finally hit the theatres on Friday. The Ranveer Singh-starrer is the recreation of India's victory at the 1983 World Cup, a feat that became a turning point for Indian cricket, but also one that many did not witness at that time, with TV sets being rare in the nation. For those who were not born at the time, this movie is a way to witness the iconic events again, with actors adding a bit more drama to the proceedings.

As the film released, many watched the 'First Day, First Show' of the same, and the reviews started pouring in immediately for the venture on the Kapil Dev-led team. The reactions prove that the journey of the film, from announcement in 2017, to release four years later, has surely been worth the while, though some found some 'flaws' in them. Here's what netizens are writing about 83 on Twitter:

'A masterpiece on celluloid', 'best sports biopic', 'wonderful movie' were the terms that netizens used for 83, while adding that it gave 'goosebumps'. They mentioned that it brought smiles and tears, and the feeling of pride for the nation.

One netizen's father had 'tears of joy' on witnessing the events of the victory. Another wrote that people would 'shed buckets of tears'. Ranveer Singh was praised in a big way, with the words 'beast of an actor', 'excellent performance' and more. The other performances were praised with words like 'spot on acting'.

'Terrific recreation', 'honest recreation' were the terms on how the historic event was brought out on screen.

READ | Deepika Padukone opens up about raving response to film '83'; 'Not a film but an emotion'

Kapil Dev's knock of 175 against Zimbabwe too was mentioned by the netizens. Actor Jiiva, who plays the role of opening batman Krishnamachari Srikkanth, was termed as a 'comic relief' by one. The direction by Kabir Khan, the 'high on patriotism' content, the final 20 minutes, also found a mention in the reactions.

#83TheFilm is a MASTERPIECE on celluloid. It’s the best Sports Bio Pic ever made. It’s brings Joy, Smile, Tears & Sense of proudness for #India.#DontMissOut#RanveerSingh as #KapilDev is Outstanding.#KabirKhan has nailed it, brilliant direction.#83TheFilmReview : ⭐️⭐️⭐️⭐️⭐️ pic.twitter.com/fJA6xMYlMP

You've seen all the games. Now watch all those magic moments behind the scenes and between the matches. Spot-on acting and terrific recreation of this iconic time. And the 175*!!! Ranveer Singh🤘🏻Despite some flaws, 83 works.. and how! Loved it! #83TheMovie #83TheFilm 🏆 pic.twitter.com/WQqq95N4ov

Watched #ThisIs83 with my parents today. My father wept tears of joy as he recalled the historic moment of India’s cricketing victory. I lived that through his experience & @83thefilm. My review via @FilmeShilmy. @RanveerOfficial #RanveerSingh #83TheFilm https://t.co/DUhcoEhPcN

#ThisIs83 Most Indians know about the 83 World Cup, and are going to shed buckets of tears watching this. And Kabir Khan tells the audiences "I am a master at making you cry; did it with Bajranji Bhaijaan, now I am back at it again".

#ThisIs83 Truly spectacular work!! Got so damn emotional, especially on the interval block and during the final! @RanveerOfficial is a beast of an actor! A guy who can make you forget who's Kapil Dev and who's Ranveer, deserves every award possible!

Makes you proud as a Indian,this generation needs to realise the importance of this event,glad someone stood up and made this Film, I wont say Masterpiece but genuinely SOLID film. #83WC #83TheFilmReview #83Review pic.twitter.com/qkz7oulSGv

What didn't work for netizens in 83?

Among the drawbacks mentioned about the film was that it had a 'weak first half'. The storytelling was not termed as the best, and that the drama was a 'bit exaggerated'. Another wrote that the movie was at the most, just 'good' and 'not great' or a 'masterpiece.' Some felt it was a big too lengthy.

#83movie #OneWordReview 3/5⭐⭐⭐
Movie is good...not great.
Biggest strength of 83 is also its weakness.
Win was unpredictable in 83
Win is predictable in 83 the film.
So the drama works but little less.#RanveerSingh is best.
Direction by @kabirkhankk
Is superb.

83 also stars Deepika Padukone in the role of Kapil Dev's wife. The other members of the cast include Tahir Raj Bhasin, Saqib Saleem, Ammy Virk, Harrdy Sandhu, Boman Irani and Neena Gupta among others.