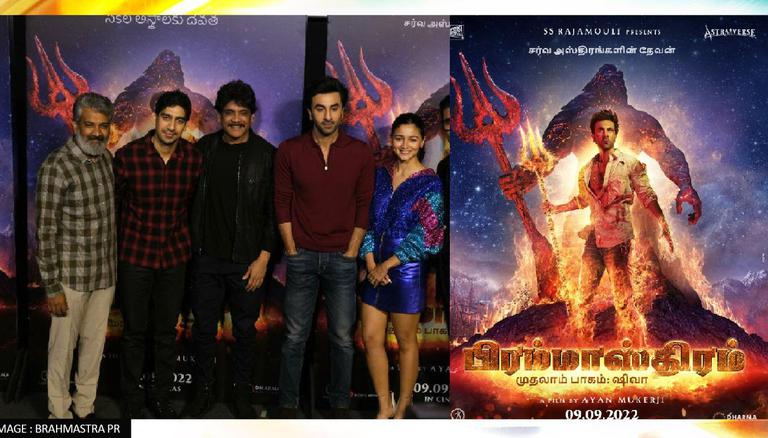 
In Tamil, Telugu, Kannada, and Malayalam, S.S. Rajamouli is all set to showcase the vision of Brahmastra with Amitabh Bachchan, Nagarjuna Akkineni, Ranbir Kapoor, Alia Bhatt, and Ayan Mukerji.

After a grand successful launch of the Motion Poster of the film, Ayan Mukerji's superhero flick to be represented by none other than S.S. Rajamouli. Since Brahmastra will be released in four South Indian languages: Tamil, Telugu, Kannada, and Malayalam, it has a pan India view and a grand intertwined concept.

Speaking on this occasion, S.S. Rajamouli said, “I’m truly glad to come on board and present Brahmāstra to audiences worldwide in the four south languages. The concept of Brahmāstra is unique, which reflects in its story and presentation. In many ways, it reminds me of Bahubali - a labour of love and passion. I have seen Ayan invest time in making Brahmāstra, patiently putting it together to get it right, much like I did for Bahubali.”

Speaking further about the film, Rajamouli added, “The film perfectly marries themes from ancient Indian culture with modern technology, and with cutting edge VFX that will blow your mind! A filmmaking journey that I can relate to - Ayan’s vision is a new chapter in Indian cinema and I am proud to be associated with Dharma Productions once again after Bahubali. Karan has a profound understanding and sensibility for good films and I feel proud to partner with him again, and with Fox Star Studios to present this film.”

Ranbir Kapoor and Alia Bhatt star in the first instalment of the trilogy, and they share screen space for the first time alongside Nagarjuna Akkineni, Mouni Roy, and Amitabh Bachchan, all of whom play crucial roles in the film. Brahmastra Part one is the first instalment of a three-part film franchise, as well as the start of India's first original world, the Astraverse. It's a new original movie universe inspired by firmly embedded concepts and legends in Indian mythology but set in the present world, with epic storytelling of fantasy, adventure, good vs evil, love and hope, all delivered with cutting-edge technology and never-before-seen visual spectacles.