Taking to Instagram, Amitabh Bachchan penned a beautiful note for his son, Abhishek Bachchan as the latter bagged an award for his performance in the film Ludo. 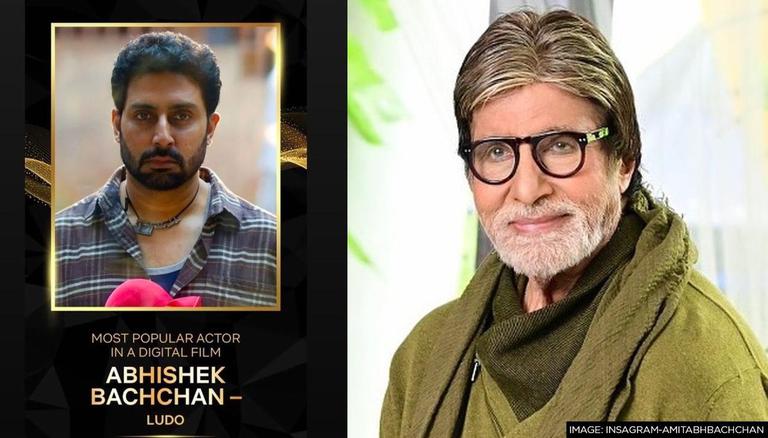 
Abhishek Bachchan's performance in the black comedy crime film, Ludo was appreciated by the critics and his fans. Recently, the actor bagged an award for his act under the category of Most Popular Award. The honour left his father Amitabh Bachchan overwhelmed. The megastar expressed his delight about the Guru star's award.

Amitabh Bachchan recently took to his official Instagram handle and shared a picture of Abhishek Bachchan's character from his film Ludo, which fetched the Most Popular Actor in a Digital Film at the IWM Digital Awards. The National Award-winner penned a note hailing his performance in the film while stating how he had many more to come his way soon, referring to his other recent performances in films like Dasvi and Bob Biswas. The caption read, "Love you Bhaiyu .. a couple more coming your way soon .. BOB BISWAS and DASVI .." (sic)

READ | Amitabh Bachchan on Pandit Shivkumar Sharma: He played santoor in its brilliance

Abhishek had credited the director of the film Anurag Basu for his performance in the film.

“He is a director I’ve had great admiration for. A latent desire that I’d get the opportunity to work with him and he’s lived up to it. He’s a mad genius. I loved working with him. I just love the way he looks at life and I think that reflects in his films. He has a very unique perspective on everyday things,” Abhishek had told PTI in an interview.