Amitabh Bachchan announced that he will be missing National Awards ceremony to be held in Delhi. He called it 'unfortunate', as he cited his ill-health.

Amitabh Bachchan announced on Sunday that he will not be attending the National Awards ceremony scheduled to be held on Monday. The veteran cited his ill-health for not being able to make it to the event to be held at New Delhi. The 77 year-old termed it ‘unfortunate’ and expressed his regrets.

READ: Naidu To Give Away 2019 National Awards, Dadasaheb Phalke Honour To Amitabh Bachchan

Amitabh Bachchan was set to collect the Dadasaheb Phalke Award, one of the highest honours in Indian cinema, that he was announced as the recipient of in September this year. Prakash Javadekar, the Union Information & Broadcasting Minister, had then announced, “The legend Amitabh Bachchan who entertained and inspired for 2 generations has been selected unanimously for #DadaSahabPhalke award. The entire country and international community is happy. My heartiest Congratulations to him. @narendramodi @SrBachchan." 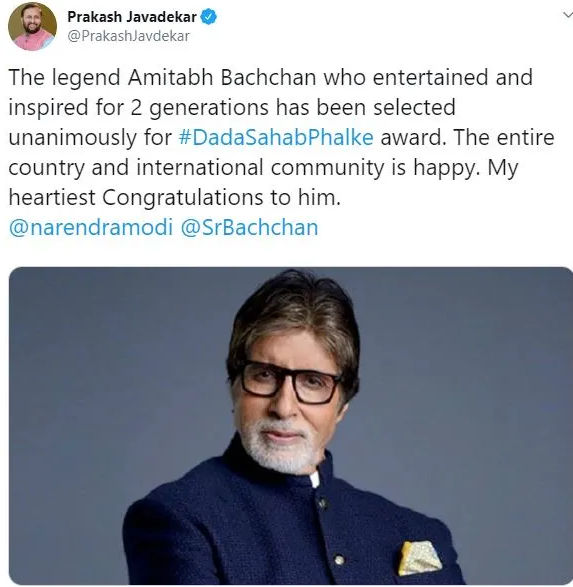 Vice President Venkaiah Naidu is set to present the honours at the 66th edition of the National Film Awards in Delhi on Monday. Vicky Kaushal and Ayushmann Khurrana were jointly announced as winner of Best Actor (Male) award. Keerthy Suresh was announced as Best Actor (Female). Uri: The Surgical Strike, AndhaDhun, Hellaro, Padmaavat are among the winners in various categories of the awards this time.

Amitabh Bachchan himself is a four-time National Award winner for Best Actor for his movies Agneepath, Black, Paa and Piku. Meanwhile, on the professional front, Big B will next be seen in Chehre also starring Emraan Hashmi. Some of the other films he will be starring in this year will be Brahmastra, Jhund and Gulabo Sitabo.