Amitabh Bachchan said that he was extremely overwhelmed with the messages for him after it was announced that he'd be honoured with the Dadasaheb Phalke Award.

With multiple National Awards, three of Government’s highest civilian honours, latest being Padma Vibhushan, Amitabh Bachchan’s honours list was already a massive one. The megastar added one more title to this glorious list, after he was announced as the recipient of the Dadasaheb Phalke Award for 2019. As social media went berserk over the announcement, even some of the legends of the film industry hailed Amitabh Bachchan. The 76-year-old was speechless with all the love pouring in for him and expressed his gratitude while asserting that he is humbled and is only their ‘humble Amitabh Bachchan’.

As Amitabh Bachchan’s Dadasaheb Phalke Award became the most talked-about news on social media, the veteran actor stated that “There is a paucity of words searching a response” for the "generosity of words” that he was congratulated with for the honour. Big B added that he was “deeply grateful and most humbled” while expressing his “sincerest gratitude." The megastar added that he was overwhelmed with the love, but said he was just their ‘humble Amitabh Bachchan’.

T 3298 - There is a paucity of words searching a response .. for the generosity of words that pour in ..
I am but deeply grateful and most humbled .. my sincerest gratitude ..

On his blog, Big B wrote, “.. what really resides in the mind shall never ever be known .. and may it never ..

.. gratitude and the express of  immense humbleness bear supreme today ..  and love ..” (sic)

The Union Information & Broadcasting Minister Prakash Javadekar on Tuesday made the announcement on Twittter, “The legend Amitabh Bachchan who entertained and inspired for 2 generations has been selected unanimously for #DadaSahabPhalke award. The entire country and international community is happy. My heartiest Congratulations to him. @narendramodi @SrBachchan." 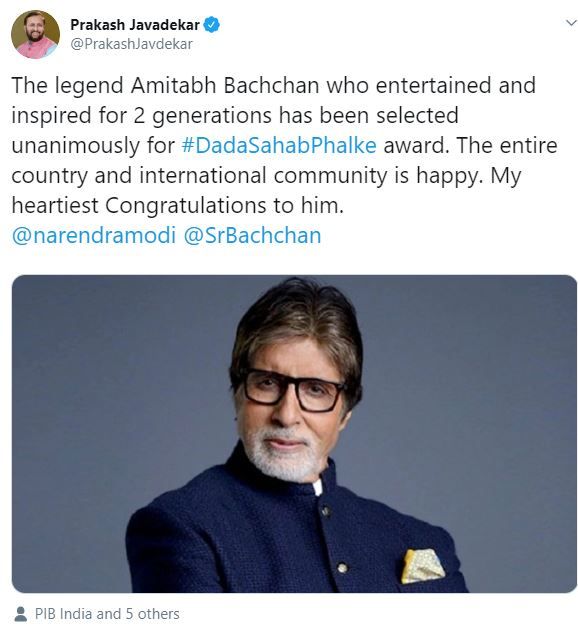 There were congratulatory wishes for Amitabh Bachchan from all across, including Rajinikanth, Lata Mangeshkar, Asha Bhosle, Mammootty, Nagarjuna, Karan Johar, Kartik Aaryan, Ayushmann Khurrana and many others.

Amitabh Bachchan will be honoured with the award on the day the National Film Awards will be handed to the winners.

READ: Amitabh Bachchan: A Few Of The Many Awards He Has Won In His Career

Amitabh Bachchan is still one of the busiest actors of Bollywood right now, having ‘Sye Raa Narasimha Reddy’, ‘Jhund’, ‘Brahmastra’, ‘Chehere’ and ‘Gulabo Sitabo’ up for release over this year and the next year. His 'Badla' was one of the most successful films this year.

READ: Upcoming Amitabh Bachchan Films That The Audiences Are Excited About