Actor Amruta Subhash expresses gratitude towards men in Lily's life, her character from Bombay Begums. Check out her appreciation post on Instagram-

Amruta Subhash took to her Instagram handle on Sunday, March 15, 2021, to express gratitude for the men in Lily's life, her character in Bombay Begums. Amruta added a video of cake cutting ceremony with Sachin Chaudhry on the sets of Bombay Begums along with the cast and crew. She also added images consisting of a behind-the-scenes picture with Sachin and Prashant Singh, her photo with Imaad Shah, and many more. In the caption, she first thanked Sachin Chaudhry who essayed the role of Lily's son and as Lily's dharma was motherhood, he was the most important man in her life. She wrote she had a challenging scene with Neel Dewan and she was thankful for the way he surrendered to the scene. She went on to express gratitude to her co-stars Prashant Singh, Lokesh Gupta, Imaad Shah, Danish Hussain, and also male members from the crew of the web series.

After Amruta Subhash added the post on her Instagram feed, the first people to comment on the post were none other than the cast of Bombay Begums. Plabhita Borthakur, who essayed the role of Ayesha, and Shahana Goswami, who essayed the role of Fatima in the web series, showed their love by writing several red heart emoticons in comments. Danish Hussian wrote clapping hands and hugging emoticons to applaud her gratitude post. Sachin Chaudhry actually called her 'Aai' and wrote an elaborate comment to thank her for her kindness and praising his work. Read comments here- 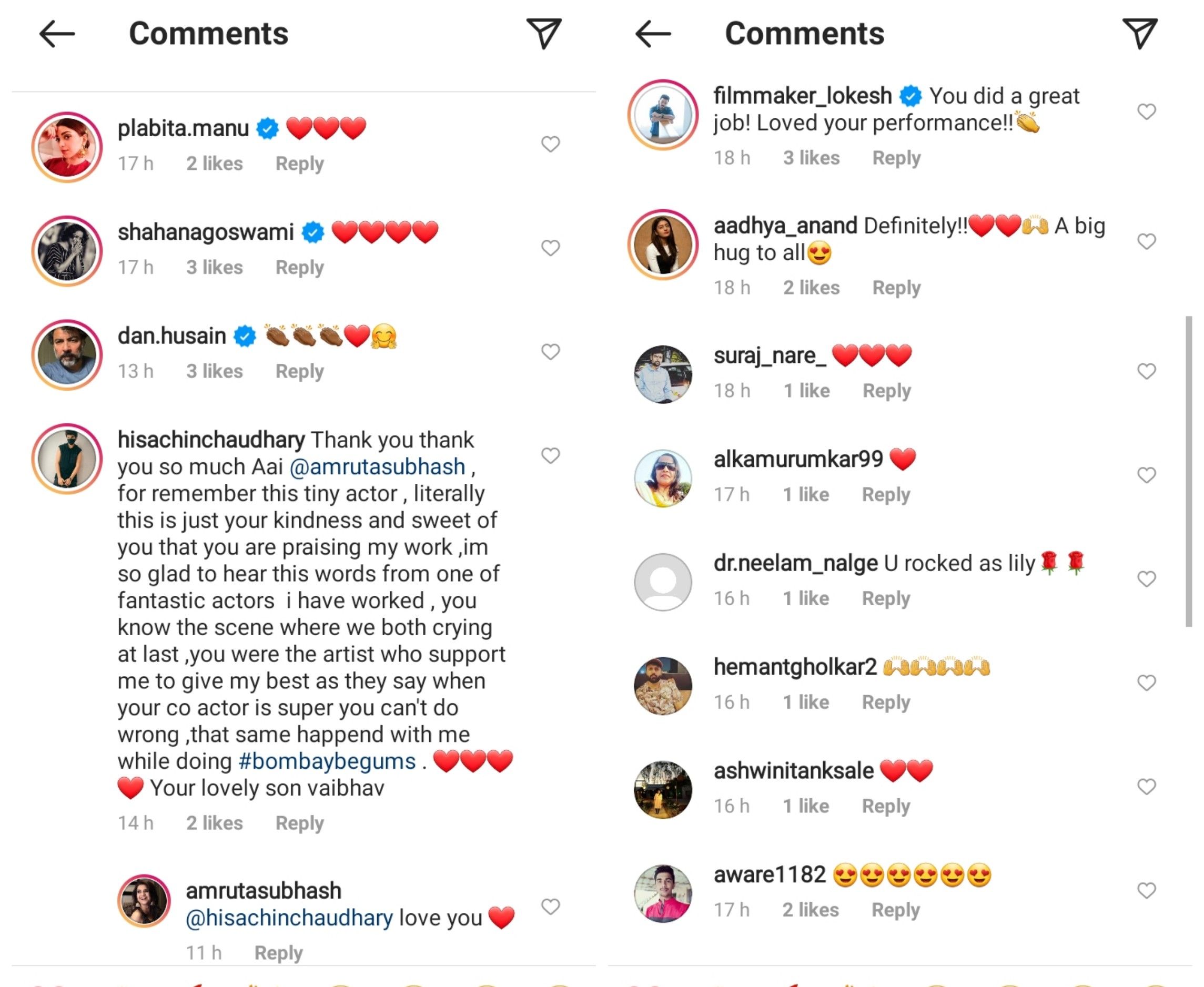 Amruta Subhash made her acting debut with the National Award-winning film and India's Oscar entry for the year 2004, Shwaas. She then went on to star in several critically acclaimed films and she won National Film Award for Best Supporting Actress in 2013 for her role in the Marathi film Astu. She also played a role in the 2019 film Gully Boy for which she won Filmfare Award for Best Supporting Actress. She starred in Netflix's original series Selection Day that premiered in 2018 and opposite Nawazzudin Siddique in the crime thriller series Sacred Games for season 2 in 2019.