Anand: Celebrate 50 Years Of This Evergreen Film With 10 Unknown Facts!

Amitabh Bachchan and Rajesh Khanna's film Anand celebrates 50 years since its release and here is some fun trivia about the film that will leave you surprised.

As March 12 came around, film lovers everywhere celebrated 50 years of the evergreen film, Anand. This film brought two of Bollywood biggest actors fame and accolades for years to come. These two were none other than Rajesh Khanna and Amitabh Bacchan! The film released on March 12, 1971, and this year, it turns 50 years old! While we celebrate this film, let us look at 10 lesser-known facts about this classic!

1. In Amitabh Bachchan and Rajesh Khanna's film Anand, there is a very famous dialogue,  “Babumoshay, Zindagi Badi Honi chahiye, lambi nahin." This term Babumoshay was apparently used by director Mukherjee to address his friend Raj Kapoor in real life. And the director hence dedicated this film to actor Raj Kapoor too!.

2. Did you know that director Hrishikesh Mukherjee wanted Raj Kapoor and Bengali actor Saumitra Chatterjee to play the lead roles in Anand? But it didn't work out, so the director turned to Rajesh Khanna and Amitabh Bachchan!

READ | When Dharmendra drunk dialled Hrishikesh Mukherjee and troubled him

3. A few years back, actor Dharmendra, who had worked with Hrishikesh Mukherjee in Satyakam, admitted being miffed with the director because he did not approach him for the film! Dharmendra was told the story of the film on a flight with the director and was annoyed when he found out that he approached other actors for it!

4. Another sweet fact is that the real-life couple Ramesh Deo and Seema Deo, who are both popular Marathi actors played a couple in the movie as well. The director was very fond of Seema Deo's character and their cameo was very highly appreciated in the film! The couple received a lot of love for their cameo in the film as well!

READ | Rajesh Khanna Quiz: Can you guess the names of these films by just their cast? 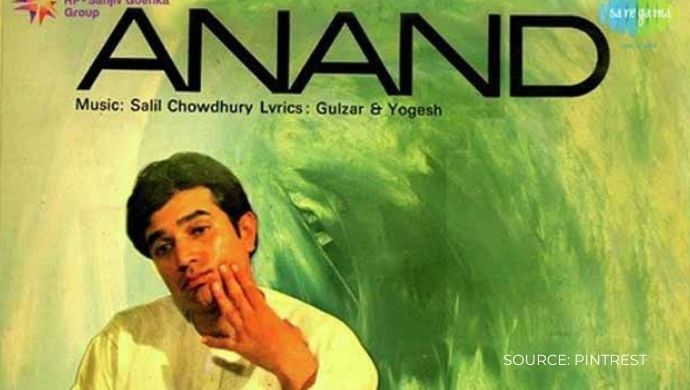 5. Kishore Kumar was the first choice for the film, but when Hrishikesh Mukherjee went to his house to discuss the film, he was not allowed inside by the watchman due to a misunderstanding and Kishore Kumar lost the role!

6.Amitabh Bachchan and Rajesh Khanna's film was so loved that it was copied, or taken inspiration from many times. Karan Johar's Kal Ho Naa Ho is also one such film that resembles Anand!

7.The evergreen poet Gulzar even helped Mukherjee write the dialogues of the film and worked on the music as well.

8. This is one of the most important facts about Anand. The entire story of the film was inspired by Hrishikesh Mukherjee's friendship with Raj Kapoor. And the film's story was first perceived when it was found that Raj Kapoor is suffering from a terminal illness and everyone thought he would soon die.

9. Director Mukherjee loved Lata Mangeshkar's voice and her songs so much that he made sure the film would have a song sung by her. He made the composer create a particular song that would suit Lataji's voice as well!

10. The director also did not want people to be in suspense, so he asked Gulzar to make the opening such that the viewers would know right at the beginning that their hero is dying!

How did you enjoy this Anand movie trivia?