Anupam Kher took to Instagram on Monday, April 05, 2021, to unveil the first look poster of his upcoming film Happy Birthday. Take a look.


Indian actor Anupam Kher took to Instagram on Monday, April 05, 2021, to unveil the first look poster of his upcoming film Happy Birthday. The film also stars Aahana Kumra in the lead role. Along with the poster, the actor penned a note revealing details about the upcoming short movie. Netizens, on the other hand, have also flooded the comment section with all things nice.

In the first poster of the film, Anupam Kher can be seen giving a sad look on his face as he is seen holding a baby pink ensemble. He can be seen donning a white shirt, white bow, a black suit along with a black hat. In the poster, Aahana Kumra can also be seen standing in the background giving a confused/angry look on her face. She donned a dark blue kurta along with a brown scarf and beige pants. One can also spot a dusty wall with a bright tube light. The film’s title is also given a smoky effect.

Along with the poster, Anupam wrote, “Excited to share the first look of our short film #HappyBirthday”. He added, “It has already been selected at some prestigious international film festivals! Hope you like it! ðŸ˜ðŸ˜Ž #ShortFilm”. Take a look at the post below.

As soon as Anupam shared the poster online, netizens went on to comment on all things happy and nice. Some of the users went on to congratulate the actor, while some revealed how excited they are for the upcoming short film. Aahana Kumra also commented saying, “always happy to collaborate and learn from you sir”. Another one wrote, “Awesome the first look.... nicely designed and colour shades too”. Take a look at a few more comments below. 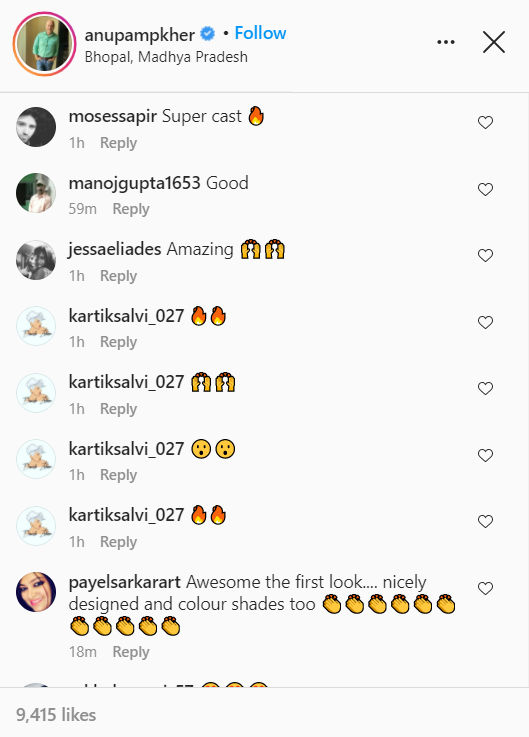 Anupam Kher will be seen in the mystery drama short film Happy Birthday, which will be released soon. The Prasad Kadam-directed film stars Kher and Aahana Kumra. The actors previously collaborated on the 2019 film The Accidental Prime Minister. The release date has not yet been revealed by the makers of the film. The actor will also be seen in many upcoming films such as Alert 24X7, Koochie Koochie Hota Hai, The Last Show, Zamaanat: And Justice for All, Sooryavanshi and many more.