Anushka Sharma was mesmerised by an actor's 'legendary expressions' in iconic film. Sharing a video, she gushed over Madhuri Dixit in Hum Aapke Hain Koun..!

Hum Aapke Hain Koun..! had hit the screens in 1994 and created a storm at the box office. The charm of Salman Khan and Madhuri Dixit was a rage among the youngsters and even family audiences then. Even 26 years later, the movie and its actors still continues to make an impact.

Anushka Sharma was the one to be left mesmerised by Madhuri Dixit as she watched the movie at Saturday midnight. The actor shared a video of the song Didi Tera Devar Deewana from the film being played on her TV. Terming it ‘Uff’, Anushka was left completely impressed looking at the lead actor’s ‘legendary expressions’ of the Dil To Pagal Hai star. 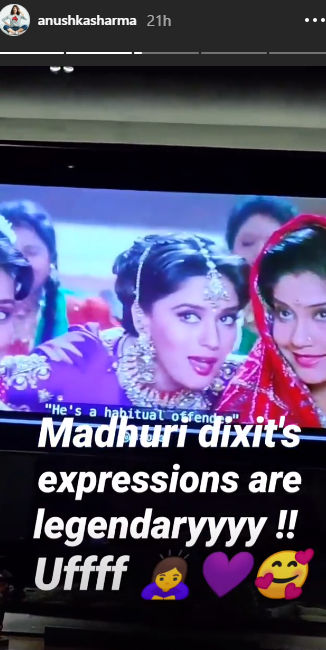 Anushka was only six years old when the film released, and though it is not known if Madhuri inspired Anushka to become an actor, Madhuri has inspired many other actors to join Bollywood.

Hum Aapke Hain Koun..! was directed by Sooraj Barjatya. The movie also starred Renuka Shahane, Mohnish Bahl, Anupam Kher, Reema Lagoo, among others. The film revolved the love story of Salman and Madhuri’s characters, amid the equation between their respective families and the marriage between Mohnish and Renuka’s characters.

The 25 year anniversary of the movie was celebrated with fanfare last year.

Meanwhile, Anushka Sharma is yet to announce her next after Zero. Her name was linked with the Satte Pe Satta remake. However, there has been no update on it.