Arjun Kapoor in a recent interview said that he felt strange when Janhvi Kapoor calls him 'Arjun Bhaiya' and added that it was still new to him. 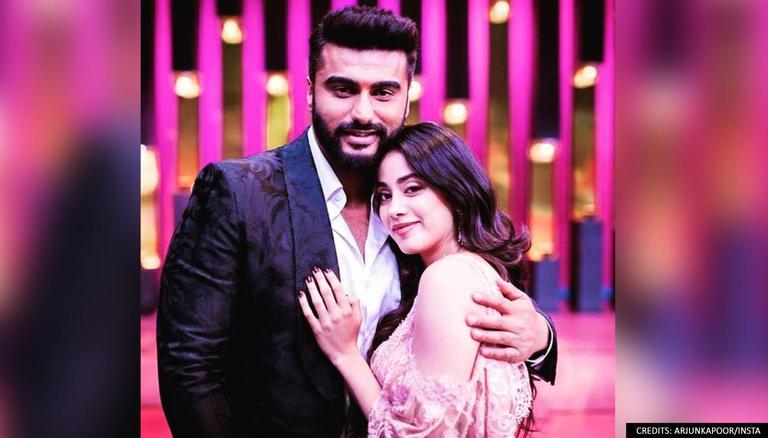 
Arjun Kapoor recently spoke about his equation with his half-sister Janhvi Kapoor. The actor said that he was still getting accustomed to Janhvi calling him 'Arjun Bhaiya'. Arjun and his sister Anshula Kapoor connected with their half-siblings, Janhvi Kapoor and Khushi Kapoor, after the death of their mother Sridevi in 2018.

Arjun Kapoor on Janhvi Kapoor addressing him as 'Arjun Bhaiya'

In a clubhouse session with The Bollywood Film Club's Aniruddha Guha, the Sardar Ka Grandson actor said that his half-sister Janhvi calling him 'Arjun Bhaiya' was still very new for him and it felt strange. Arjun said ", ‘Arjun Bhaiya’ still sounds very strange to me, only because Anshula calls me ‘bhai’ in a very strange way. ‘Arjun Bhaiya’ is a very new thing. So, when Janhvi says that, it still feels very, very new to me, actually."

The actor also added that while subtitling his episode from a popular celebrity talk show which he attended with his half-sister he translated ‘Arjun Bhaiya’ as ‘Brother Arjun’. He further explained that he never asked Janhvi to address him in a certain way and said that It came very naturally to Janhvi to call him ‘Arjun Bhaiya’.

Arjun Kapoor recently unveiled the first look from his much-awaited horror-comedy movie Bhoot Police. Taking to his Instagram handle the actor shared a poster of his character named Chiraunji. While sharing the poster he wrote "Unravel the mysterious door of supernatural powers with laughter! Meet CHIRAUNJI in #BhootPolice." The movie also features Saif Ali Khan, Jacqueline Fernandez, Yami Gautam, and Javed Jaffrey in the lead roles. The movie is scheduled to release on 17th September 2021, on Disney+ Hotstar.

Arjun Kapoor will soon be seen in Mohit Suri's action thriller movie Ek Villian Returns, the movie is a spiritual sequel of Suri's 2014 film Ek Villain. The actor took to his Instagram and revealed that he had resumed the shoot for the movie. Arjun wrote "Villain Mode On! #EkVillainReturns shoot resumes." The movie also features John Abraham, Disha Patani and Tara Sutaria in lead roles. The movie is scheduled for worldwide cinema release on 11 February 2022.