Bollywood actor Arjun Kapoor who is known to be very close to his family, recently shared an adorable throwback picture featuring his sisters on social media.

Bollywood actor Arjun Kapoor who is known to be very close to his family, recently put out an adorable throwback post on social media. The actor took to Instagram on Saturday, October 12, and shared an old photograph from his childhood where he can be seen posing with his sisters- Anshula Kapoor, Janhvi Kapoor, and Rhea Kapoor.

WATCH | 'I Urge You All To Celebrate Your Individuality': Arjun Kapoor Shares Heartfelt Message For Sister Anshula And Others On International Women's Day

While Arjun can be seen carrying his 'childhood swag' in the photograph, a cute little Rhea can be seen sitting right beside him carrying a toddler Janhvi Kapoor. On the other end is Anshula Kapoor who can be seen posing with a big smile on her face. Arjun Kapoor funnily captioned the post saying, "My Childhood Swag was always high !!! @kobebryant 4 life @nbaindia !!! Also, the sister s weren’t too shabby either... "

This is not the only one, Arjun Kapoor shared yet another picture on his Instagram story and the adorable snap shows the Kapoor girls posing for the photograph while he himself looks sideways. In the post, pointed at his own picture, Arjun hilariously wrote, "This guy is not a fan of posing too much..." while pointing at her sisters he wrote, "Them on the other hand..." 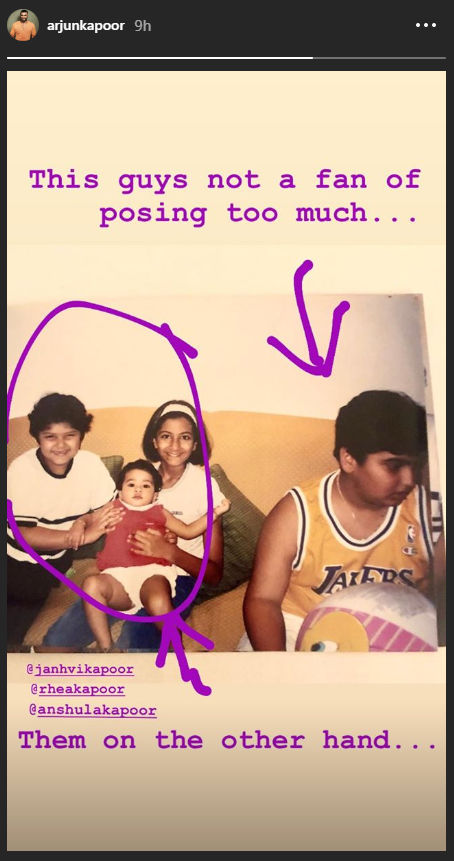 What's next for Arjun Kapoor

Meanwhile, on the work front, Arjun Kapoor is gearing up for the release of 'Panipat'. From horse riding to rigorous gym sessions, Arjun Kapoor is training hard for the upcoming venture. Besides, Arjun Kapoor, the film also stars Kriti Sanon and Sanjay Dutt in the lead. His last stint alongside Parineeti Chopra in 'Namastey London' did not fare well at the box office.