Arjun Rampal and Mehr Jesia have now legally separated, after a family court in Bandra granted them divorce by mutual consent. Read details below

Arjun Rampal and Mehr Jesia have now legally separated, after a family court in Bandra granted them divorce by mutual consent. The duo was married for 21 years, and the couple was granted a divorce under the Special Marriage Act, after almost six months. Arjun and Mehr had approached the court to dissolve their marriage on April 30, 2019. While the exact terms of the divorce are not known, the couple's two daughters Mahikaa and Myra will be living with their mother Mehr in their home in Bandra. Reports of their split surfaced in 2011, but it was only eight years later when they officially announced their separation. Four months after that Arjun moved out to a 2BHK.

READ: Arjun Rampal Expresses His Delight Over Winning The Best Actor In A Web Series Award 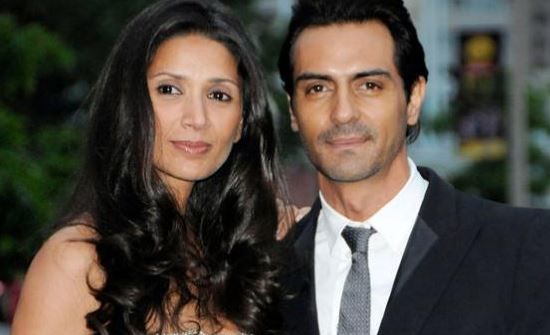 Meanwhile, although Mehr Jesia has been out of the limelight for quite a while now, Arjun Rampal often makes headlines after he started seeing model Gabriella Demetriades. Arjun Rampal and his girlfriend Gabriella Demetriades welcomed their baby boy on July 18 and have named him Arik. As per media reports, Arjun and Gabriella's romance rumours hit the gossip columns in November 2018. They have attended several media events and made public appearances together. In January, they again made headlines after reports of their impending wedding made the rounds.

Gabriella, a South African model, and actor, made her Bollywood debut with 'Sonali Cable' in 2014. Arjun has starred in films such as Rock On!! Ra. One, Housefull, Om Shanti Om, among others. Arjun was last seen in the 2018 film Paltan. He also appeared in the web series The Final Call. Fans and audiences are waiting for his much-anticipated next release.

READ: Arjun Rampal Expresses His Delight Over Winning The Best Actor In A Web Series Award

PEOPLE HAVE PLEDGED SO FAR
Gabriella Demetriades: All you need to know about Arjun Rampal's girlfriend
Arjun Rampal lands in Delhi, says, 'the air is unbreathable'
Arjun Rampal's girlfriend Gabriella gets called out for 'copying' neck trend
Delhi Pollution: Priyanka Chopra, Arjun Rampal, & others share concern
Sushmita Sen: Here is a list of the best films you can watch on her birthday
Shweta wears love for Amitabh Bachchan on her sleeve literally; Big B, Jaya Bachchan proud
Aamir Khan urges fans in China to take precautions against Coronavirus in a video, Watch
Mr India row: Fans ask Sonam Kapoor if she had a word with Boney Kapoor, actress clarifies
DO NOT MISS
ROMI DEV ON '83'
SOUVENIR TO BE GIFTED TO TRUMP
SHAHEEN BAGH MEDIATOR MOVES SC
SPECIAL 'ALL-VEG' MENU FOR TRUMP
THACKERAY SLAMS BJP
SHARMA BAGS 11TH 5-WICKET HAUL