After keeping fans on their toes for long, makers of the film 'Atrangi Re' shared first looks of the starcast including Akshay Kumar, Sara Ali Khan and Dhanush. 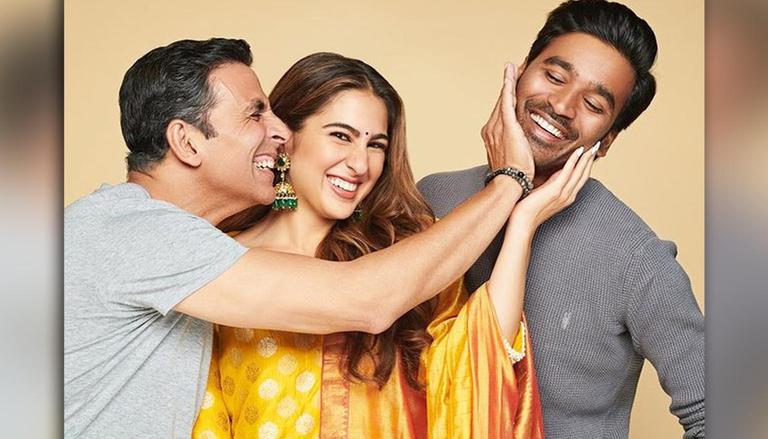 
After keeping fans on their toes for long, makers of the upcoming film Atrangi Re dropped the first looks of the entire star cast. The Aanand L Rai directorial film stars Akshay Kumar, Dhanush, and Sara Ali Khan in key roles. The film has been produced by Bhushan Kumar, Colour Yellow Productions, and Cape Of Good Films.

Introducing his character from the film, Akshay wrote, " An Atrangi story about the madness of love. Adding magic to the story, yours truly. Trailer releasing on November 24 on Disney+ Hotstar". The first look video shared by the Khiladi actor showed his character as a king who can be seen holding a red rose for someone special.

In another post, Akshay gave a glimpse of Dhanush's first look and revealed that he will be seen playing the role of Vishnu as a boy next door image. "Meet iss story ka Atrngi No 2 jiska naam hai Vishnu." At last, Akshay shared the first glimpse of Sara's character who will be seen playing the role of Rinku. "Ek ladki pyaar main pagal. Miliye Atrangi No 1 Rinku se kal." The video showed Sara's different facets as she looks bubbly. Atrangi Re is Dhanush's second film with Aanand L Rai after the 2013 film Ranjhanaa. It is Akshay Kumar's first film with Sara Ali Khan and Dhanush.

READ | Dhanush wraps up the shoot of 'Atrangi Re'; shares a sweet picture to celebrate

The film's shooting began in 2020. However, it was halted due to the pandemic and the lockdowns. During the film's shoot, actor Akshay Kumar and the film's director Aanand L Rai had contracted the virus due to which the film was delayed again.

Talking about resuming the shooting of the film during the pandemic, Sara had told PTI, "I was shooting for the second schedule of Atrangi Re. I’m now sitting in a room where people are wearing masks, suits, and gloves. It’s a little strange. It was the same onset, with my director in a mask and gloves. It was different. But the passion and excitement with which everybody in the film fraternity comes to set have not changed. The enthusiasm which binds us all is still there. So it really felt like I never left."

READ | 'Atrangi Re': Akshay Kumar reveals 'OTT may simply be the medium' for film's release