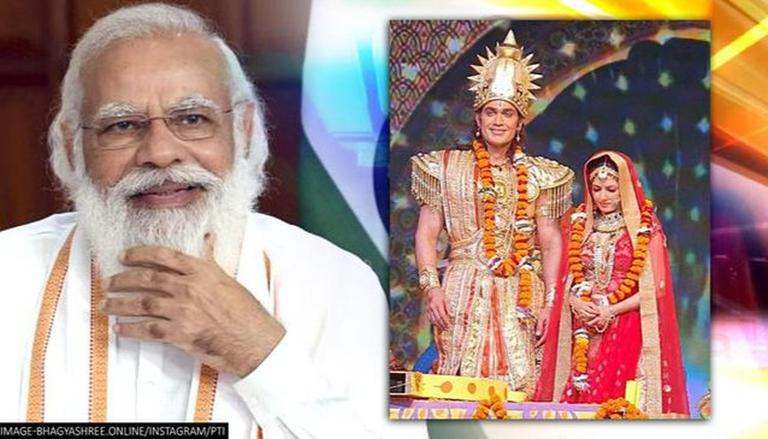 
Versatile actor Bhagyashree recently had a great time taking an active part in Ayodhya's Ram Leela. The actor who played the role of Sita in the mythological epic was elated to received appreciation from fans and followers on social media. To her surprise, the Maine Pyaar Kiya star received appreciation from Prime Minister Narendra Modi, who sent his wishes to the entire cast of the Ram Leela.

Bhagyashree had earlier shared pictures from the Ram Leela in Ayodhya and wrote, “SIYA RAMCHANDRA KI JAI! Last night was blessed to be able to be in Ayodhya for Ramleela, as Sita Maiya! Unbelievable to be able to connect with 19 crore people worldwide watching this great epic streamed live. Being here during the auspicious time of #navratri was as perfect as it could be (sic).” Bhagyashree, in her Sita avatar, was seen donning a red lehenga and heavy jewellery along with flower garlands. The actor felt ‘honoured’ after PM Modi lauded the efforts of the cast and explained the significance of Ramayan.

The letter roughly translated in English read, “ It felt immense happiness to know about Ram Leela being staged in Ayodhya. The epic that transcribes truth’s triumph over evil was amazingly portrayed by great actors and artists. Ramayan is an integral part of our culture and the and the ideal personality of Lord Shri Ram gives us a new inspiration at every stage of life. The sublime message of collectivism and social harmony that we get from Ramayana will never end its relevance. Every character of Ramayana inspires us to take our actions and sacraments to the highest level."

The Ram Leela in Ayodhya usually hosts a live audience. However, due to the global pandemic, this year's stage show was streamed online and broadcasted on national television. Apart from this, the actor even shared pictures from her sightseeing in Ayodhya where she can be seen visiting some temples along with her husband.

Meanwhile, on the work front, Bhagyashree who got a breakthrough with the 1989 film Maine Pyaar Kiya, recently made her comeback to cinema with Kangana Ranaut starter Thalaivii. Bhagyashree played the role of Jayalalitha's mother, Sandhya. The multi-lingual film also marked her Tamil debut. Bhagyashree will next feature in Radhe Shyam, along with Prabhas and Pooja Hegde.