Ranbir Kapoor and Alia Bhatt's new home is under construction in Bandra. Due to cyclone Tauktae the construction site is facing a major issue. 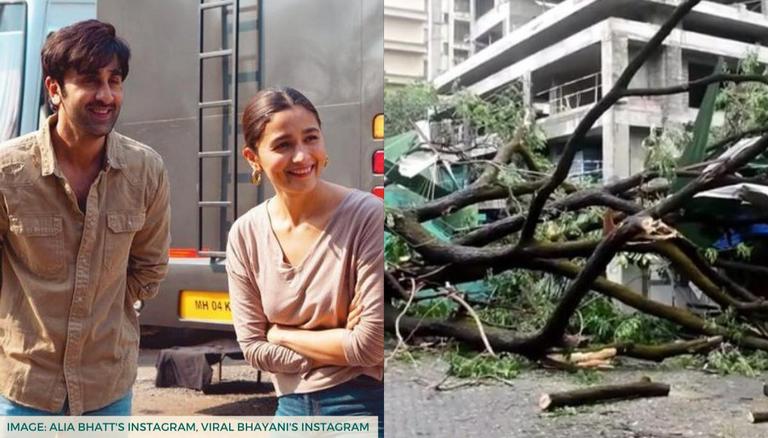 
Cyclone Tauktae has created havoc across various parts of the country. Many costal areas of Maharashtra suffered tremendous loss because of it. Cyclone Tauktae brought in heavy rainfall and strong gusty winds along it. After-effects of this cyclone are visible across Mumbai and its suburbs. One of the celebrity homes that was affected due to it was Ranbir Kapoor and Alia Bhatt’s new home that is under construction.

Viral Bhayani shared a video of the disruption caused outside Ranbir and Alia’s new home in Bandra. In the video, a huge tree has been uprooted and has blocked the entire street. The tree has also blocked the entrance of an apartment complex. Passersby can be seen ducking under the branches of the uprooted tree while several cars are parked around.

Along with the video, Viral Bhayani also shared a few more details. He wrote, “Visual outside #ranbirkapoor and #aliabhatt future home and other visuals from Bandra in Mumbai. #CycloneTauktae created a havoc while we were struggling to battle the current COVID situation across the country”. Watch this video below:

While Gangubai Kathiawadi’s teaser has been released, its trailer and film release might get postponed due to COVID’s second wave. The same is the case with RRR that also Ram Charan, Ajay Devgn, and Jr. NTR. Moving on, apart from Brahmastra, Ranbir Kapoor also has several projects lined up. He will star alongside Vaani Kapoor in Shamshera and is also starring in Sandeep Reddy Vanga’s film Animal.