Diet Sabya once again called out Sonam Kapoor Ahuja's look for a magazine shoot. This is not the 1st time when this anonymous user attacked the actor's choices.


Diet Sabya has attacked Sonam Kapoor Ahuja’s latest look for the Harper’s Bazaar magazine. The anonymous user recently shared screenshots of Sonam’s look and mentioned that the accessories were inspired by Schiaparelli. Diet Sabya shared a message sent by a user who asked the former if the actor's look was copied from GOT. Replying to the same, Diet Sabya wrote, “No, they are Schiaparelli darling,” followed by nail paints and a laughing emoji.

In another screenshot, a user commented on Sonam’s outfit by saying, “Is the beautiful version of Raw Mango’s critically criticised campaign,” to which Diet Sabya responded, “Luvvv/Sis no”. Meanwhile, the fashion industry’s watchdog also went on to call Ahuja’s attire “Cool and Edgy.” This isn’t the first time when Sonam’s outfit was called out. Earlier, Diet Sabya, Sonam and sister Rhea indulged in a verbal war after the Instagram user had trolled the Ek Ladki Ko Dekha Toh Aisa Laga actor for wearing a pink Anamika Khanna lehenga with a statement on it that read "Everything Is AK-OK". 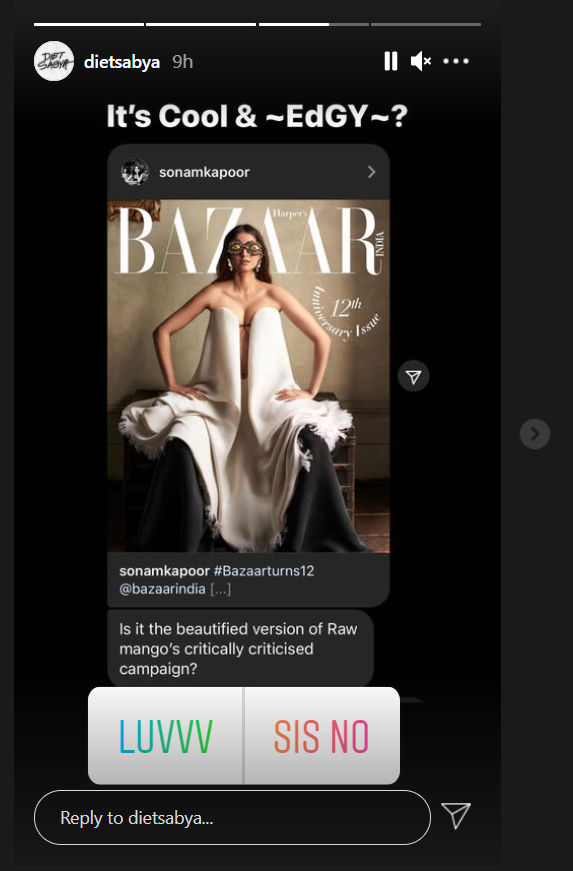 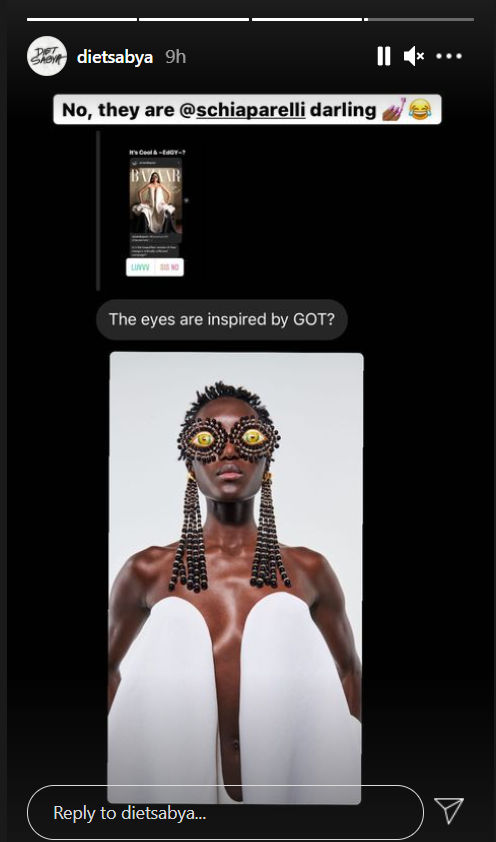 Diet Sabya had called out Indian designer Anamika Khanna, who had crafted her newest edition known as 'AK-OK'. The design was worn by Sonam Kapoor at Isha Ambani's wedding in December 2018. The anonymous account had alleged that there were uncanny similarities between Anamika's creation and the renowned fashion editor Anna Wintour's June 2018 AWOK Jordan's. Later on, Rhea Kapoor and Sonam Kapoor both hit back and defended the designer. Diet Sabya has called out several other celebs' outfits too; including Alia Bhatt, Karisma Kapoor, Radhika Madan, Kareena Kapoor Khan, Ananya Panday, Kiara Advani, Rakul Preet Singh, among others.

READ | Remember when Namrata Shirodkar and Maheep Kapoor shared the same stage for THIS reason?

Meanwhile, on the work front, Sonam Kapoor Ahuja wrapped up shooting for her upcoming outing Blind, produced by Sujoy Ghosh, Avishek Ghosh, Manisha W, Pinkesh Nahar, and Sachin Nahar and Hyunwoo Thomas Kim. The crime thriller also features Purab Kohli, Vinay Pathak, and Lillete Dubey in pivotal roles. Blind is directed by Shome Makhija and the shooting of the upcomer took place in Glasgow, United Kingdom. In the movie, Sonam will be seen playing the role of Gia Singh.