As the news about Dilip Kumar's demise comes in, actors Ajay Devgn and Sunny Deol recently shared heartwarming notes mourning the loss of the legend. 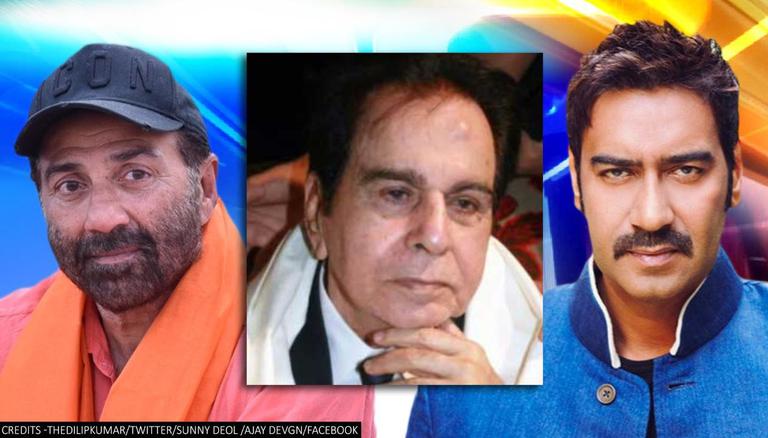 
Condoling the demise of the legendary Bollywood star, Dilip Kumar, Ajay Devgn and Sunny Deol on Wednesday gave a tribute to the late actor. Ajay Devgn reminisced the time he spent with the iconic actor and shared an unseen picture of them together. Sunny Deol, on the other hand, dropped in yet another cherishing photo of Dilip Kumar on social media and stated how it was an end of an era.

Taking to Twitter, Ajay Devgn recalled how he spent many moments with the legend, Dilip Kumar and added how some of them were ‘very personal’ while some of them were from the time they spent ‘on stage’. Adding to it, he shared an overwhelming note stating, “nothing really prepared me for his passing away”. Ajay Devgn further referred to him as “an institution” and a “timeless actor” and added how he was left heartbroken on hearing the news. The actor even sent his deepest condolences to Dilip Kumar’s wife, Saira Banu.

Shared many moments with the legend...some very personal, some on stage. Yet, nothing really prepared me for his passing away. An institution, a timeless actor. Heartbroken.
Deepest condolences to Sairaji🙏🏼#DilipKumar pic.twitter.com/Il8qaMOOhf

Many of the fans received the news about Dilip Kumar’s demise through Ajay Devgn’s Twitter handle who then dropped in condolences for the family. Some of them also stated how Dilip Kumar will always be in their hearts while others stated how ‘legends never die’.

You will be forever in our hearts 🙏

Sunny Deol also took to his Twitter handle the moment the news about Dilip Kumar’s passing away surfaced on the internet. In his tweet, he added a picture of the late iconic star with a camera kept behind him. He stated, “End Of An Era!” and added how he will always be missed.

End Of An Era!
#DilipKumar Sahab!
You will always be missed 💔 pic.twitter.com/wYBdC29qzP

Veteran Bollywood actor Dilip Kumar passed away in Mumbai on Wednesday. He was 98. The Padma Vibhushan recipient had been facing multiple health issues for the past few weeks, being hospitalised numerous times for breathlessness and being treated upon for bilateral pleural effusion. The news was confirmed by Dr Jalil Parkar, the pulmonologist treating the actor at Mumbai's PD Hinduja Hospital.

Dr Jalil Parkar issued a statement reading, "The doyen of Indian film industry Mr Dilip Kumar breathed his last today at 7.30 AM at Khar Hinduja hospital after a long and protracted illness. May God bless his soul in heaven". Soon after, his family confirmed the same