Diljit Dosanjh, who shot to fame post the success of Udta Punjab, is quite famous for his charismatic demeanour and onscreen performances. Apart from being lauded for his several successful songs, the actor is also known to be active on social media, as he enjoys a massive fan following. Recently, Diljit Dosanjh caught the attention of netizens as his comment on Kim Kardashian’s recent live stream video left them in splits. Here are all the details.

While fans have been singing praises of Diljit’s sense of humour when he left a comment on Gal Gadot’s recent picture on Instagram, the actor's recent comments on Kim Kardashian’s live post also caught the attention of netizens. Hollywood beauty mogul and reality show star, Kim Kardashian is known for her social media presence. Recently, Kardashian took to her official Instagram handle to connect with her fans on a live stream video. While fans of Kardashian were busy singing praises of her on the live stream, Diljith seemed to be curious about Kim’s husband, Kanye West’s whereabouts. The actor left a comment in Punjabi which read, “Kanye Kitthe aa?”. Diljit Dosanjh also enquired about Kim’s wellbeing. Take a look: 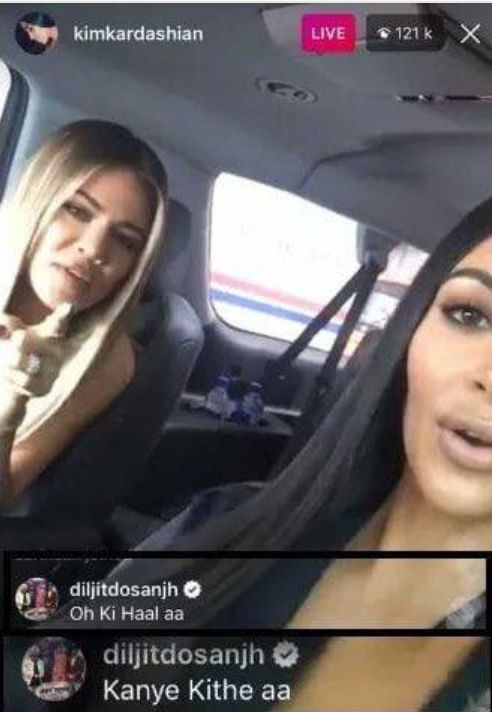 What’s next for Diljith Dosanjh?

Diljit Dosanjh is currently gearing up for the release of his upcoming comedy entertainer, Good Newwz along with Kareena Kapoor Khan, Akshay Kumar and Kiara Advani. Helmed by Raj Mehta, Good Newwz chronicles the story of a hilarious swap between two couples at their attempt with surrogacy. Good Newwz is all set to hit the theatres on December 27, 2019.