Disha Patani recently treated the Malang cast to a brunch post promotions and her co-stars have the most hilarious things to say about her. Here are the details

Disha Patani is gearing up for her upcoming film, Malang. Starring Anil Kapoor, Aditya Roy Kapoor, and Kunal Kemmu, the film is directed by Mohit Suri. It revolves around a young couple whose seemingly perfect life gets disrupted when they get linked to a corrupt cop and his righteous counterpart. It is set to hit the screens on February 7, 2020. While the shoot was wrapped a while ago, the cast is currently busy doing promotions for the film and is often snapped at different events and also graced The Kapil Sharma show recently.

Anil Kapoor thanks Disha Patani for Brunch, reveals one of her secrets

Disha Patani recently treated the cast of Malag to a brunch and her co-stars have the most hilarious things to say about it. While the team was spotted having a bang at the bash, Anil Kapoor and Kunal Kemmu had some candid moments to share. Anil Kapoor took to his social media to share a picture of Patani with all her food lined up in front of her. Kapoor is caught teasing the actor in the picture saying that people think she does not eat. The star then went on to thank her for the 'fab' brunch. 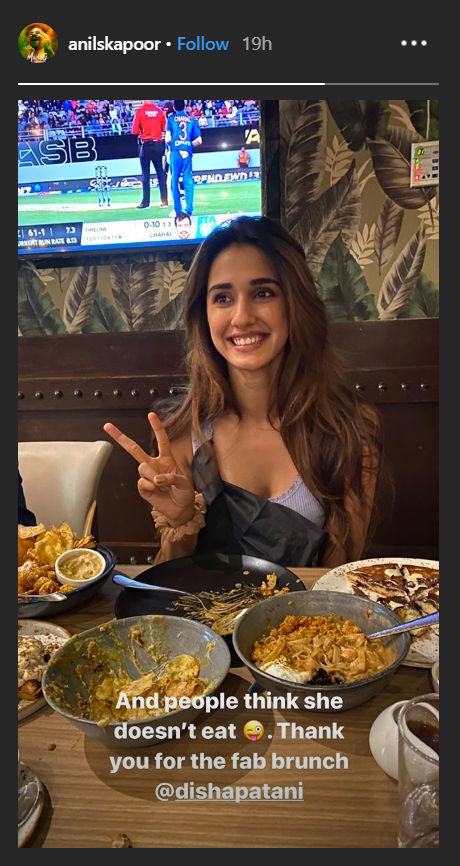 ALSO READ | Anil Kapoor Debuts On TikTok Ahead Of 'Malang' Release, Seen His Video Yet?

Not only Anil Kapoor, but actor Kunal Kemmu also jumped on the bandwagon to tease the Baaghi actor. He also posted a similar picture on his social media story with Disha's food all around her. In an attempt to tease her, he tagged all the dishes as her and even made a pun about Dish and Disha. While the two stars were busy mocking her, Patani is seen happily posing for the pictures. Due to her fit body, fans often think that Disha Patani does not eat much and her co-stars helped clear that up with these hilarious pictures. The trailer of the film introduces Disha, Anil, Aditya and Kunal as compulsive killers. Each of them have their own reasons and backstories, each one deadlier than the other. Disha is also set to star opposite Salman Khan in his upcoming film Radhe and will also be seen in KTina, produced by Ekta Kapoor.

ALSO READ | Disha Patani Reveals That She Despises Watching Herself On The Big Screen. Here Is Why