Esha Gupta On Being Trolled For Sultry Pics: 'Why Not Ask Male Actors To Cover Up?'

Esha Gupta opened up about being trolled and expressed her exasperation over people who hold women responsible for promoting rape with their outfit choices. 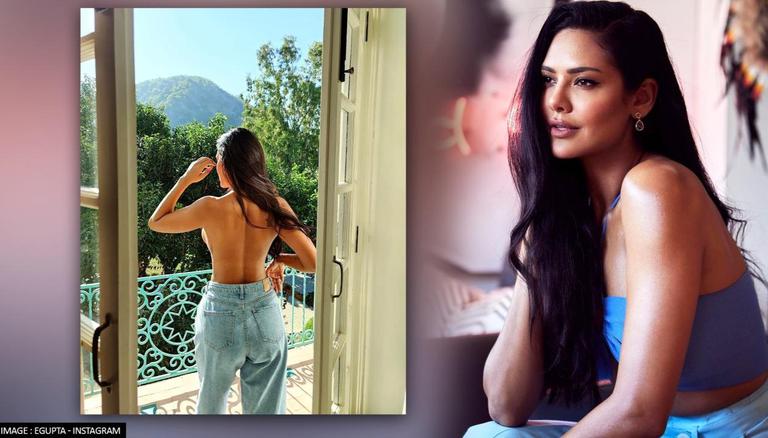 
Jannat 2 star Esha Gupta is often trolled for uploading sultry snaps on her verified social media handles. The actor recently took to Instagram and dropped several snaps where she can be seen sunbathing on a balcony. The pictures featured her topless, with her back facing the camera.

As soon as the pictures were posted, netizens flooded the comment section with risqué comments. The actor opened up on being trolled on social media. Here's what the actor said.

Esha Gupta: 'Why not ask male actors to cover up?'

During her conversation with Hindustan Times, Esha Gupta said slut-shaming is 'gender bias'. She stated that are so many male actors who put up shirtless pictures, 'why not ask them to cover up?'. She said that people look at them and go, 'Waah bhai, kya body hai! (Wow, what a body!)'. She further expressed her exasperation over people who hold women responsible for promoting rape with their outfit choices. Gupta said that it is 'their mentality that has to be blamed' and that a 'woman's clothes making people think about rape is problematic'.

READ | Esha Gupta calls herself 'queen of the jungle' as she poses in Maldives; see pics

Even though the actor was trolled years back, she has learned to turn a deaf ear. While speaking to the outlet, Gupta explained that she has become 'matured' to the level where she does not react anymore. She added that she also understands that 'people will point fingers no matter what one does'. The One Day: Justice Delivered star recalled putting up a snap in a saree and somebody wrote, "Aaj poore kapdon mei photo daala hai! (Today, you have posted a picture in full clothes)". She added when she posts a picture wearing makeup, people call her 'plastic beauty', and when she posts without makeup, they call her 'ugly' and ask her to put on makeup.

Sharing her thoughts, Gupta said that the 'problem lies at a basic level'. She explained there are many who don't like girls who are upfront and only like 'cutesy' ones. She said that people know she is strong and if someone slaps her, she is going to slap them twice. The actor added that this is not just limited to India, but everywhere else, even though conversations are going on about 'gender inequality and sexism'. She added that she wishes people become more progressive in their thoughts.

READ | Esha Gupta enjoys the 'best spa' in Maldives, treats herself to a plate full of greens

WE RECOMMEND
Sayani Gupta celebrates her 36th birthday by being on sets of upcoming project
UP govt recommends CBI probe into suspicious custodial death of businessman in Gorakhpur
Neena Gupta writes about being molested as a child in her autobiography 'Sach Kahun Toh'
Neena Gupta's Manju Devi is back as actor resumes shooting for 'Panchayat' season 2
BJP's Kavinder Gupta demands action against targeted killings in Jammu & Kashmir
Listen to the latest songs, only on JioSaavn.com