Fan Asks, 'How To Deal With My Fiance During Periods?'; Ileana D'Cruz' Reply Is Incredible

Ileana D'Cruz recently replied to a fan who asked her how to deal with fiance during periods and the actor's reply is pure gold!

Ileana D'Cruz recently replied to a fan who asked her how to deal with fiance during periods and the actor's reply is pure gold! Ileana, who keeps interacting with fans, shared a MEME on her Instagram story relating to 'Girls on Periods'.

The fan reading the meme asked Ileana, "help me to handle such situations all with my fiance… I don’t want to hurt her in this times' [sic]

Ileana replied saying, "Approach with caution. Be prepared to either be giving her an insane amount of cuddles or not be anywhere near her vicinity. If she starts to growl, throw chocolate at her. And run away."

Ileana D'Cruz goes on a virtual date with her girl gang amid COVID-19 lockdown; see pics 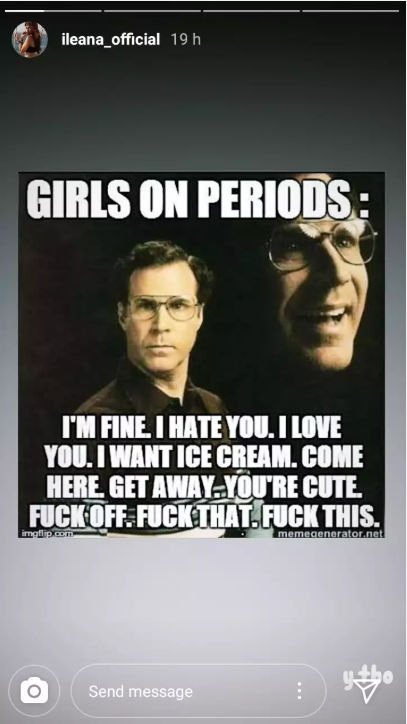 On the career front, Ileana D'Cruz was last seen sharing the screen with an ensemble cast including John Abraham, Anil Kapoor, Arshad Warsi, Pulkit Samrat, Urvashi Rautela, and Kriti Kharbanda in the Anees Bazmee directorial Pagalpanti which released last year. The film was not received well by either the film critics or the audience, and therefore tanked at the box office. However, D'Cruz will next be seen alongside Abhishek Bachchan in their upcoming film titled The Big Bull. The film is expected to release in September 2020.

PEOPLE HAVE PLEDGED SO FAR
LATEST NEWS
View all
3 hours ago
Tapsee Pannu mourns grandmother's death with heartfelt post, says she 'will stay forever'
4 hours ago
Ananya Panday paints first unofficial poster of 'Khaali Peeli'; fans call it 'struggle'
3 hours ago
Sonu Sood meets Maharashtra Governor; briefs about his efforts to help migrant workers
4 hours ago
From a salute to Sonu to 'Boycott China'; Here's Entertainment news recap of the day
55 mins ago
A little girl asks Sonu Sood, 'Papa is asking, will you send Mumma to Nani house?'