'Malang' actor Anil Kapoor has a hilarious take on the sharp response being received from the audience on Joaquin Phoenix's latest film 'Joker'. See picture

Joaquin Phoenix - the actor, whose performance as the titular DC supervillain is garnering major Oscar buzz, has received some sharp reponses to the movie's treatment. The actor has been facing some tough questions regarding the extreme themes of the film, which has been rated R for "strong bloody violence, disturbing behaviour, language, and brief sexual images". Anil Kapoor, in his own andaaz, took to his Instagram handle and gave a 'Lakhan' twist to all the negative reviews coming in. He wrote: "Joker - All I have are negative thoughts" and further added his hilarious comment by writing: "Anil Kapoor - Just Dhina Dhin Dha it, all your thoughts will be bole toh ekdum Jhakaas". Take a look at the picture - 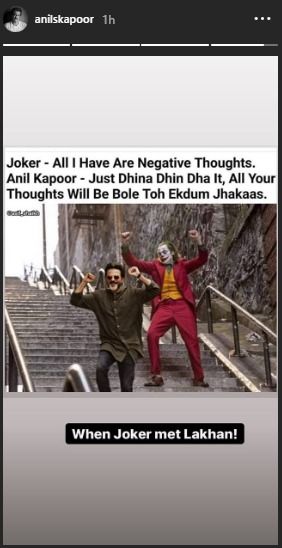 Anil Kapoor who was addressing the media at the launch of Khalid Mohamed's book "The Aladia Sisters" along with Karan Johar, Javed Akthar and Asha Parekh on Tuesday in Mumbai, also said: "I recently watched 'Joker', and although the film has received 99 per cent positive reviews, there are some reviews that are not very positive -- which surprised me because I loved the film. So, these things keep happening. Obviously, now the time has passed, so I have become much more thickskinned where reviews are concerned. But earlier when you start your career, you are quite sensible because there are certain films in which you and your team have worked really hard, so when you don't get favourable response, that can be quite upsetting."

Not just Anil Kapoor, but when Shah Rukh Khan also was asked by a user on Twitter to describe Joaquin Phoenix's performance in the recently-released Todd Phillips-directed "Joker", he called it "well nuanced. So felt... quietly screaming."

In a profile interview with Vanity Fair, the 44-year-old actor said he understands the "strong reaction" the film has received. "I didn't imagine that it would be smooth sailing. It's a difficult film. In some ways, it's good that people are having a strong reaction to it," he said. Phoenix maintained he wanted the audiences to either "sympathise or empathise" with The Joker. "It's like, because that's what we have to do. It's so easy for us to -- we want the simple answers, we want to vilify people. It allows us to feel good if we can identify that as evil. 'Well, I'm not racist 'cause I don't have a Confederate flag or go with this protest.'

"It allows us to feel that way, but that's not healthy because we're not really examining our inherent racism that most white people have, certainly. Or whatever it may be," the actor said. Phoenix believes the viewers are capable of taking the good of the character with the bad. "Whatever issues you may have. It's too easy for us and I felt like, yeah, we should explore this villain. This malevolent person. There's no real communication and to me that's the value of this. I think that we are capable as an audience to see both of those things simultaneously and experience them and value them," he added.