Farah Khan penned a note for the newlyweds Rajkummar Rao and Patralekhaa, calling their wedding the most 'beautiful and emotional' affair she has witnessed. 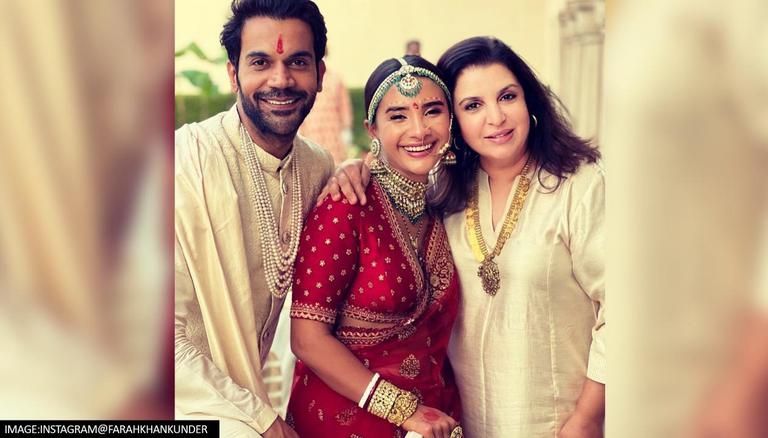 
Rajkummar Rao and long time girlfriend Patralekhaa recently tied the knot in an intimate wedding ceremony attended by the couple's close friends and family members. The duo, who had been dating for more than a decade chose a five-star hotel in Chandigarh for their dreamy nuptials, which were followed by a grand wedding reception. Myriad photos from the ceremony are making rounds on the internet, with fans and celebrities gushing about the duo.

Farah Khan, who also attended the wedding ceremony, penned a note for the 'golden couple', noting that their nuptials were the most 'beautiful and emotional' affair she has witnessed. She also shared glimpses from the wedding fun as she helped Rajkummar Rao get ready as well as struck a pose with Huma Qureshi for their 'white party'.

Taking to her Instagram handle on Tuesday, November 16, Farah uploaded a happy picture with the newlyweds and wrote," You don’t marry the person you can live with.. you marry the person you Can’t live without.."  Calling their wedding 'beautiful' and 'emotional', she noted that their married life will be nothing short of this. "love u Raju&Goldy .. #goldencouple", she added. Take a look.

Farah was also seen helping the groom adjust his 'sehra' and wrote," Dulke Ka Sehra" along with the "wedding of the year" hashtag. She then uploaded a still with Huma, who was also present at the ceremony with her brother Saqib Saleem. "White party @iamhumaq... it was the best of times" she wrote.

READ | As Rajkummar Rao and Patralekhaa tie the knot, celebrities shower love on the newlyweds

Other celebrities are also dropping wishes for the newlyweds, with Taapsee Pannu noting "You both make ‘me at for each other’ feel actually real! Congratulations". Rajkummar's White Tiger co-star Priyanka Chopra wrote, "I’m not crying you are crying! Congratulations... wohoooo." On Patralekhaa's post, she wrote, "Omgeeee you guys are stunning! Congratulations."

READ | Patralekhaa's wedding veil had a special message for Rajkummar Rao; Here's what it means