Janhvi Kapoor was excited as she spotted her cousin sister Shanaya Kapoor in her role of an Assistant Director on the sets of Gunjan Saxena: The Kargil Girl.

Taking up the role of an assistant director has often been the first step for aspiring star kids before they venture into acting.  The latest to join this list, is Sanjay Kapoor’s daughter Shanaya Kapoor. Learning the ropes of filmmaking would not be an easy task, but for Shanaya it could be slightly easier, considering her sister Janhvi Kapoor is present on the sets. As Shanaya learns the tips and tricks of the industry on the sets of Gunjan Saxena: The Kargil Girl, Janhvi Kapoor was super delighted.

READ: Star-kid Shanaya Kapoor Learnt The Ropes Of Bollywood As An AD

The actor shared a snap of Shanaya from the sets, where her cousin looks all delighted as an assistant director, be it wearing the cap or the walkie talkie, and even making some gesture related to her role. Sharing the picture on her Instagram stories, Janhvi Kapoor wrote, “OMG Chop Chop Chop”, apparently a term to ask someone to hurry, something that the on set assistant directors use often. Without a doubt, the experience on sets will set Shanaya Kapoor in good stead for her future. 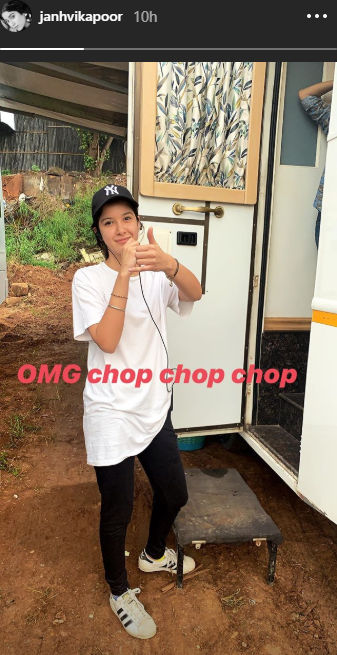 Anil Kapoor, Boney Kapoor and Sanjay Kapoor are the sons of Surinder Kapoor, who was a film producer. While Boney followed in the footsteps of their father, Anil and Sanjay ventured into acting. Anil Kapoor’s daughter Sonam Kapoor was the first among their kids to make her debut, in Sanjay Leela Bhansali’s Saawariya opposite Ranbir Kapoor in 2007. This was followed by Boney’s son Arjun Kapoor debuting with Habib Faisal’s Ishaqzaade opposite Parineeti Chopra in 2012. Sonam's brother Harshvardhan Kapoor was the next to debut, in Rakeysh Omprakash Mehra’s Mirzya in 2016. Boney’s daughter Janhvi Kapoor then made her debut with Shashank Khaitan’s Dhadak in 2018.

Janhvi’s sister Khushi Kapoor is also venturing into films, and is currently studying filmmaking at the New York Film Academy. At the same time, Shanaya Kapoor is also being tipped for a debut. It’d be interesting to see if any of them decides to become a filmmaker instead of an actor, since they are now learning the ropes of both the roles during their film education. Incidentally, Shanaya is extremely close to Ananya Panday, daughter of Chunky Panday and Suhana Khan, daughter of Shah Rukh Khan, having been friends since childhood. While Ananya made her debut with Student of the Year 2 last year, Suhana is being rumoured to be launched in a big way soon as well.

The next generation of divas is ready to take on the world! pic.twitter.com/MPebI6h7kp