Amid reports of Thalaivi's direct OTT release, actor Kangana Ranaut slammed Chota bachcha as gangster in her announcement post to squash the speculation.


Bollywood actor Kangana Ranaut, on Tuesday, took to the story session of her verified social media handle and slammed the reports of Thalaivi getting a direct OTT release while taking an indirect dig at Alia Bhatt's next Gangubai Kathiawadi. In an announcement shared on Instagram stories, Kangana wrote, “Thalaivi digital rights are with Amazon (Tamil) and Netflix (Hindi) none of them can individually stream the movie before theatres release, all the fake propaganda movie mafia doing please ignore." However, the other half of the caption seemed to be mocking Alia’s ‘bad acting’ in Gangubai Kathiawadi.

"Bikau media write about ‘the film’ whose trailer was hugely criticised and mocked for bad acting and wrong casting of chota bachcha as gangster and is now being dumped on digital platform. Write about ‘the film’ which is being dumped on digital as they have the reality check that the film is a mistake, I don’t see enough news about that", read the rest of her caption. 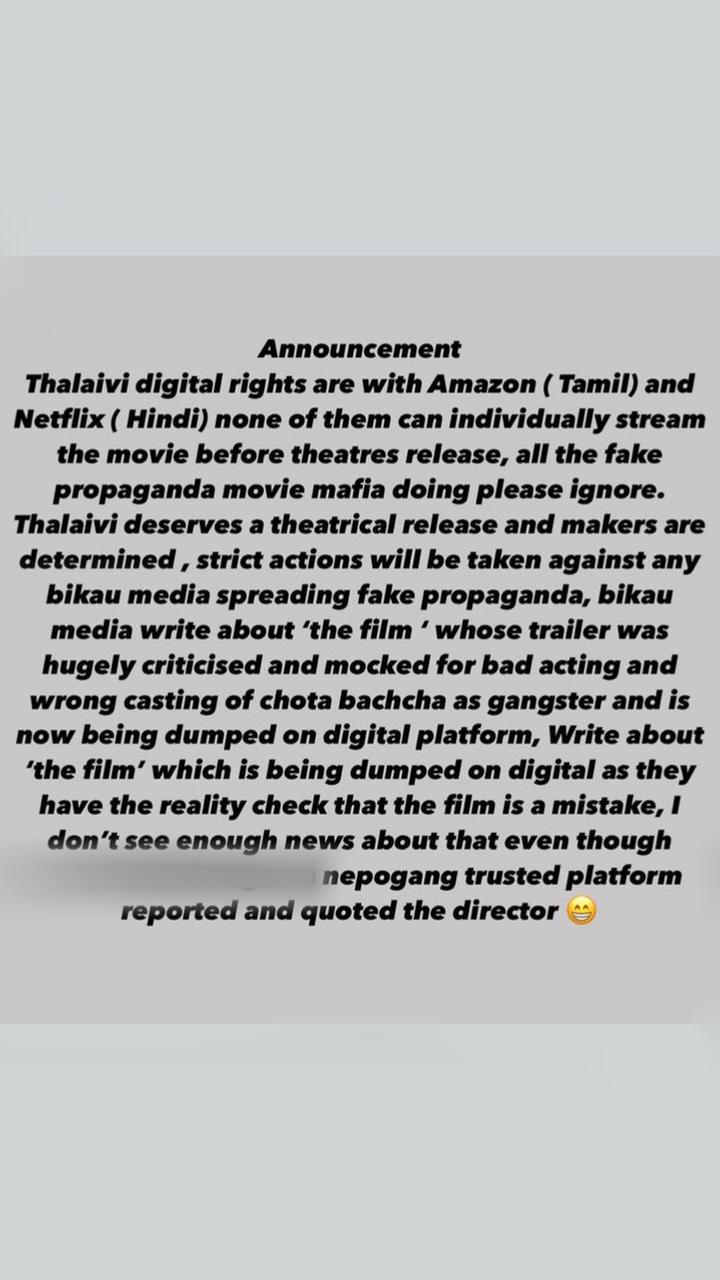 Hours before the Queen actor shared the above announcement, her sister Rangoli Chandel had taken a direct dig at Alia Bhatt's Gangubai Kathiawadi. Sharing the screenshots of the articles, which stated that Sanjay Leela Bhansali is considering releasing the Alia Bhatt starrer on OTT and speculated Thalaivi's OTT release, Chandel had written, "They will spread this. It’s a lie don’t believe Nepo mafia PR, Thalaivi is coming in theatres." 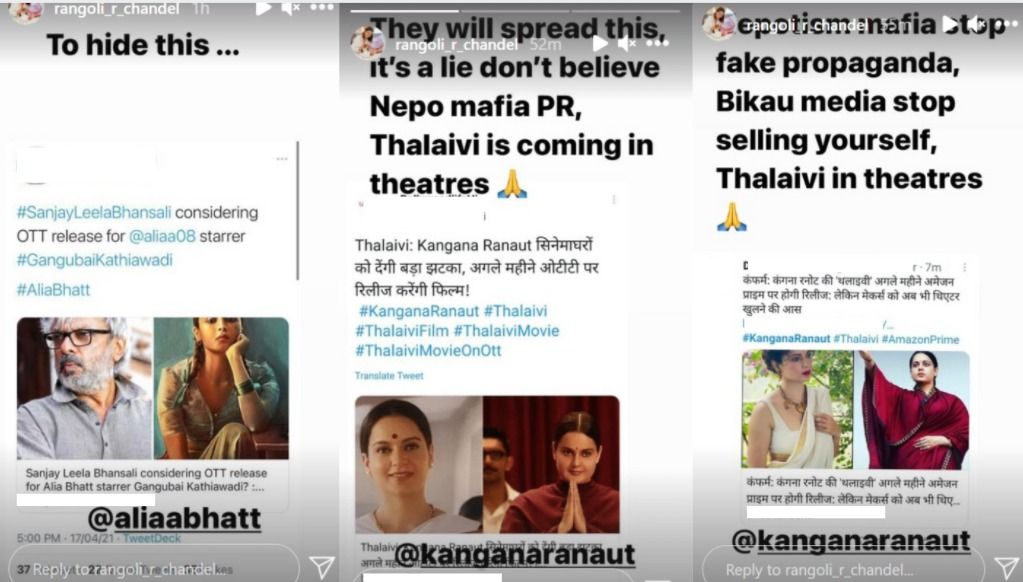 Ranaut's upcoming movie, titled Thalaivi, will see the actor portraying the part of the late former CM of Tamil Nadu, Jayalalithaa. Kangana Ranaut's movie is slated for a release on April 23, while information regarding Thalaivi's OTT release is yet to be made available. Helmed by AL Vijay, the ensemble star cast of the film will also feature Prakash Raj, Bhagyashree, Arvind Swami, and Madhoo, among many others.

The Alia Bhatt starrer is set to release in theatres on July 30, 2021, in the Hindi and Telugu languages. The actor will be seen sharing screen space with Vijay Raaz, Indira Tiwari, Rohit Sukhwani and Seema Pahwa. Directed by Sanjay Leela Bhansali, who is producing it in collaboration with Jayantilal Gada, the plot of the upcoming film is inspired by Hussain Zaidi authored book, Mafia Queens of Mumbai.