Actor Kareena Kapoor, who recently left for the Maldives to ring in husband Saif Ali Khan’s 51st birthday with two sons, shared a picture from the getaway. 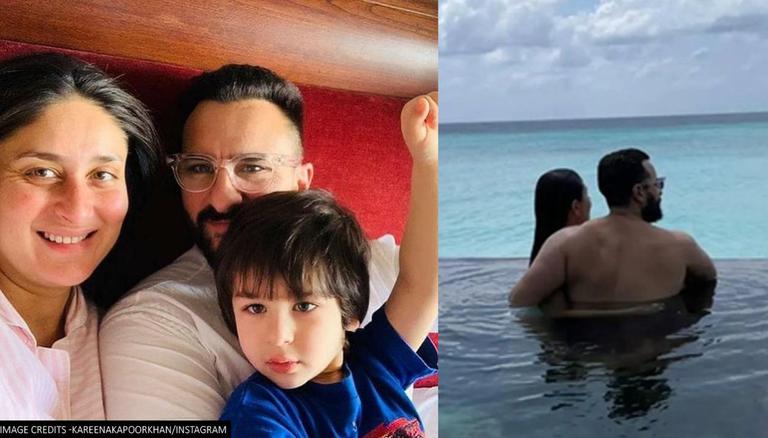 
Actor Kareena Kapoor, who recently left for the Maldives to ring in husband Saif Ali Khan’s 51st birthday with her two sons, took to Instagram and gave a glimpse of the getaway. While celebrating the special day, Kareena shared a bunch of pictures and penned a romantic note for the ‘love of her life’ while wishing for an ‘eternity’ to stay with him.

In the first picture, Saif and Kareena can be seen posing while Taimur makes a goofy face. Fans can also spot the newborn Jeh lying and playing in the background. In the other picture, Kareena and Saif can be seen posing in a pool as they enjoy a dreamy and picturesque landscape around. While captioning the post and wishing her husband, Kareena wrote, “Happy Birthday to the love of my life... To eternity and beyond with you is all I want”, along with many heart-shaped emoticons.

Several fans of the couple sent in their best wishes while praying for the entire family. One of the users wrote, “Cute family mashallah. Allah bless you all".  Another user wrote, “ Happy Birthday sir". A third user chimed in and wrote, “The perfect and stylish family. May God bless you….”. Apart from Kareena, Saif Ali Khan also received adorable birthday wishes from his sister Saba Ali Khan Pataudi on Instagram. Saba took a stroll down memory lane and shared a throwback picture from Saif’s childhood days. "happy Birthday to my Big Brother. Wishing you love luck success and happiness”, she wrote alongside the picture.

Earlier, several pictures and videos of the couple spotted at the private airport were doing rounds on the Internet. In the video posted on social media, Jeh and Saif were spotted at Kalina Airport, Mumbai. While Kareena, Taimur, and Saif wore white, we saw a glimpse of Jeh who was wearing a navy blue shirt. Earlier, Saif and Kareena were spotted with their sons Taimur and Jeh as they stepped out in the city. Saif Ali Khan and Kareena Kapoor welcomed their second child, a baby boy named Jehangir in February 2021.

Saif Ali Khan and Kareena Kapoor are already parents to a son named Taimur. He was born in 2016. Recently, it was revealed that Saif and Kareena had named their second child Jehangir, for which the celebrity couple received mixed responses from their fans. After becoming parents to Taimur in December 2016, the couple was subjected to public scrutiny by netizens who believed they named their child after a Turkish invader. The couple later cleared the air by revealed that Taimur was derived from a Persian word meaning 'Iron'.