Karisma Kapoor Is All Hearts About Stunning Picture Of Mother Babita From 60s; See Pic

Karisma Kapoor is all hearts as she shares a stunning picture of mother Babita Kapoor from the 1960s. Have a look at the picture with all details here.


Bollywood actor Karisma Kapoor recently took to social media to wish her mother, Babita Kapoor, on the occasion of her birthday. She shared a stunning throwback picture of her mother from the mid-1900s when she was a leading artist in Bollywood. In the photograph shared, she can be seen gracefully smiling while pulling off the 60s fashion effortlessly. Babita Kapoor is remembered for her work in blockbuster movies like Farz, Haseena Maan Jayegi, and Kismat, amongst others.

Karisma Kapoor in awe of her mother Babita

Bollywood actor Karisma Kapoor recently took to social media to share a series of pictures while wishing her mother, Babita Kapoor, on her 74th birthday. The actor posted a major throwback picture of her mother, which was originally shared by a fan page. In the photograph, Babita Kapoor can be seen following the classic 1960s fashion with puffed up short hair and dramatic wing eyeliner. She can also be seen wearing a heavy stone necklace and a set of matching earrings which was a major style statement at that time.

Karisma Kapoor has also expressed her thoughts on the picture through a sweet GIF that says, ‘Mom’ in a quirky font. The GIF also comes with a few heart emoticons in varied colours. Have a look at the picture shared on Karisma Kapoor’s Instagram story here. 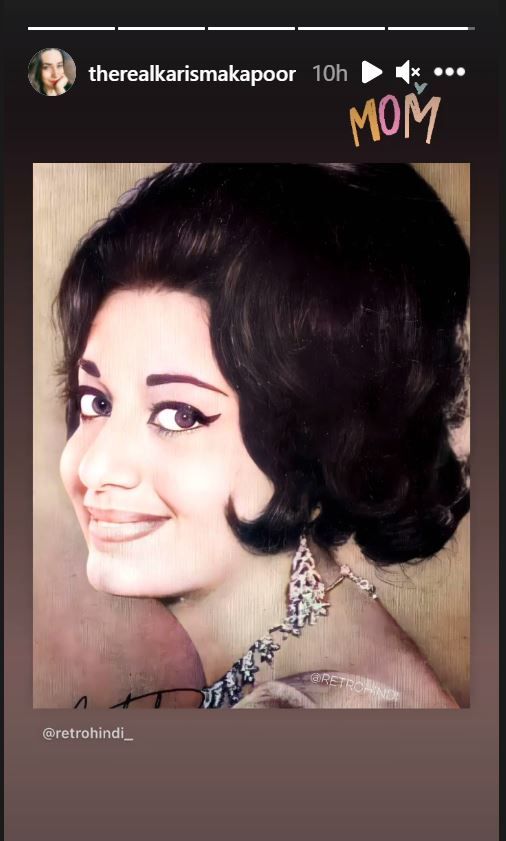 Karisma Kapoor also shared a montage video on her Instagram feed, with a series of pictures where she could be seen posing with mum Babita. In the first photograph, little Karisma can be seen sitting on the lap of her mother while smiling brightly at the camera. In another picture attached in the video, the two ladies are seen pouting while Karisma is clicking a selfie. She has also put together a solo photograph of Babita Kapoor where she can be seen posing for the camera at a fun party.

In the caption for the post, Karisma Kapoor has wished her mother a happy birthday with a sweet and meaningful message. She has also expressed her love for Babita while asking her to keep rocking in the years to come. Have a look at the post on Karisma Kapoor’s Instagram here.