Bollywood actor Kartik Aaryan, on Saturday, took to his Instagram and gave a peek into a gift he received from fashion designer Manish Malhotra.


Bollywood actor Kartik Aaryan, on Saturday, took to the story session of his verified social media handle and shared a picture of the gift he received from fashion designer Manish Malhotra. Interestingly, the snap, shared by Kartik, featured a huge bouquet of white-colour flowers. Without giving much context of it to his 20.6M Insta fam, Kartik wrote "Thank you" to Instagram it. He also tagged the fashion designer.

Kartik gets a gift from Manish Malhotra 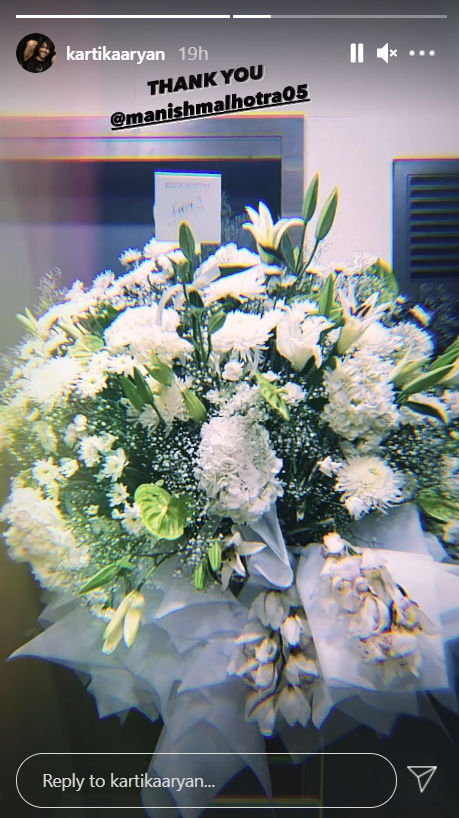 Interestingly, the Love Aaj Kal actor had recently collaborated with celebrity fashion designed for the latter's latest collection. He represented Manish's exclusive designs, titled Nooraniyat, on the ramp at Lakme Fashion Week 2021 along with his Bhool Bhulaiyaa 2 co-star Kiara Advani. On April 1, the fashion designer had shared a BTS video, featuring the Bhool Bhulaiyaa 2 stars.

In the video, Advani and Aaryan can be seen embracing each other while posing for the camera. Later, Malhotra swooped in to hold Kiara's 'dupatta' and flung it over Kartik for the photoshoot. The trio were all smiles in the video as they had some fun backstage. Meanwhile, Malhotra paired the video with Abi Sampa's song Man Kunto Maula.

On the other hand, the Pyaar Ka Punchnama actor had also shared an appreciation post for Manish. While sharing a still from the event, Aaryan wrote, "A walk down Magic Lane!". He also added that he always feels surreal when he walks for genius Manish Malhotra.

Apart from sharing the BTS, self-portraits and selfies, the Luka Chuppi actor often shares updates of his upcoming works and whereabouts. On March 22, the actor had shared his health update and revealed that he has tested positive for COVID-19. To announce the same, he had shared a picture, featuring a positive sign. Though after that he has not given any updates on his health but kept sharing picture and videos on his Instagram page.

On the professional front, the 30-year-old actor was last seen in Punjabi singer Milind Gaba's music video Nachunga Aise, which was dropped in December 2020. Along with Bhool Bhulaiyaa 2, he has multiple releases in his kitty, including Dostana 2. The upcoming film will also star Janhvi Kapoor.