Madhoo Shah From 'Thalaivi' Participates In Tika Utsav, Gets Vaccinated Against COVID-19

Thalaivi's Madhoo Shah took to her Instagram to share a picture of her participating in Tik Utsav and got vaccinated against the novel coronavirus.


Phool Aur Kaante actress Madhoo Shah participated in a vaccination drive called 'Tika Utsav', an initiation by the Indian government to encourage people to get vaccinated against the novel coronavirus. The Thalaivi actress took to her Instagram to share a picture with her fans after getting the vaccine shot. Check out Madhoo Shah's Instagram post here.

The 52-year-old actress excitedly shared a snap of her at the vaccination drive 'Tika Utsav'. Sporting a casual outfit, the actress stood behind a board that read 'I got vaccinated'. Madhoo was all smiles as she flaunted her arm where she got the vaccine. She simply captioned the post writing '#tikautsav'.

Several fans were excited to see Thalaivi actress coming in support of the vaccination drive to fight against the virus. Many fans congratulated the actress for getting the shot and one fan encouraged her to still follow all the precautions to avoid getting infected. Bollywood actress Esha Deol also dropped a comment to show her support towards Madhoo Shah. 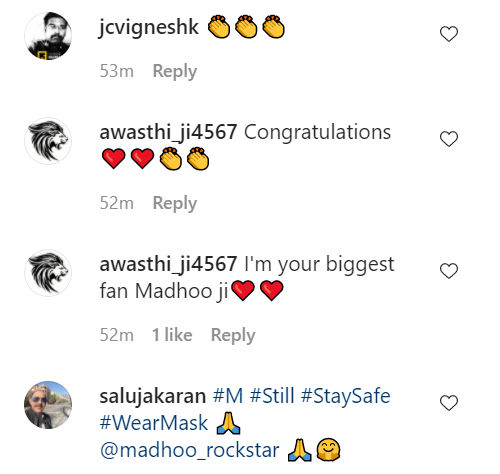 Recently, the veteran actress took to her Instagram to share a selfie and captioned it as 'Sunday lockdown mood'. Madhoo also shared a throwback picture where she compared two of her monochrome pictures and wrote 'then and now' in the caption. The Roja actress is often seen sharing pictures of her family on her social media as recently, the actress shared a picture with her daughter where they appear to be wearing similar outfits. Madhoo shared multiple pictures from her trip to the United Kingdom where she can be seen posing in a warm attire and credited her daughter for clicking her pictures.