The 67th National film Awards were announced in New Delhi on Monday and were given out by the Directorate of Film Festivals. At the ceremony, it was announced that Nitesh Tiwari directorial film, Chhichhore won the National Award for Best Hindi Film. Naveen Polishetty, one of the actors in the film, dedicated the award to late actor Sushant Singh Rajput.

Naveen Polishetty took to his social media handles and celebrated Chhichhore’s victory at the 67th National Film Awards 2019. The actor sent a tribute to late actor Sushant Singh Rajput, who was the lead actor in the film. Naveen also mentioned in the caption that he misses Sushant as he wrote, “Miss you Bhai” and inserted a heart emoticon.

Polishetty also congratulated the cast of the film and mentioned the names of their characters in the movie. Here is what Naveen wrote in the caption of the post, “Chhichhore wins the National award for Best film. I know you are watching Sushant. This one is for you . Miss you bhai â¤ï¸ congratulations to Nitesh sir , maya , Derek , bewda, mummy , Sexa and the whole team. Love , Acid .” the actor also mentioned in the caption that his latest film's Jathi Ratnalu box office collection has been amazing as well. Take a look at the post about the same below.

As soon as Naveen Polishetty uploaded the post on his Instagram handle, a number of netizens flooded it with their comments and reactions about the same. Several netizens mentioned in the comments that they are very happy for Naveen and the whole team of Chhichhore. Numerous other fans wrote in the comments that the film is one of their favourites. Check out some of the fan comments on the post below. 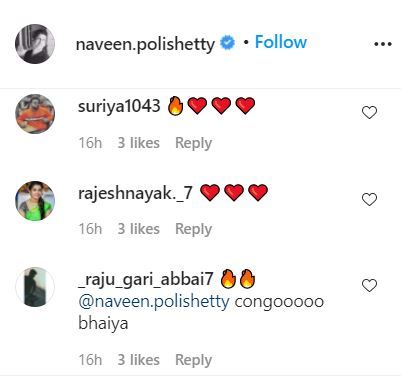 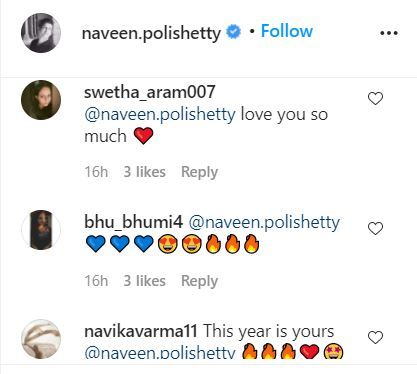 A few other fans of the actor sent him out love and kind regards and left heart and kiss emoticons. Many other people online also wrote in the comments that this year seems to be very good for Naveen. Check out some of the fan comments on the post below. 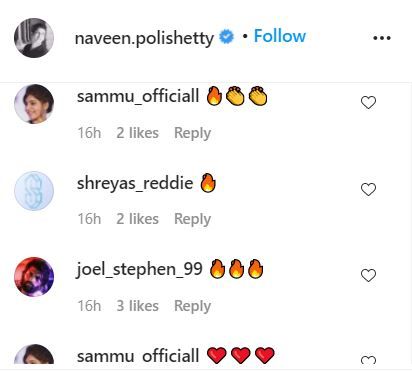 Chhichhore followed a tragic incident that forced Anirudh (Sushant Singh Rajput) to take a trip down memory lane. He reminisces his college days along with his friends, who were labelled as losers in college. The cast of the film included Sushant Singh Rajput, Varun Sharma, Naveen Polishetty, Shraddha Kapoor, Tahir Bhasin, Pratiek Babbar, Tushar Pandey, Saharsh Kumar Shukla, Nalneesh Neek and Rohit Chauhan. The film was directed by Nitesh Tiwari and was a hit at the box office.